Stories of Standards—I Got Rhythm 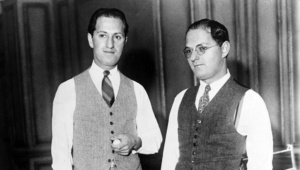 Tune in weekday mornings to hear our favorite versions of “I Got Rhythm.” Rodney Franks presents Stories of Standards Monday through Friday at 7:50 and 8:50 a.m.!

George and Ira Gershwin wrote “I Got Rhythm” for the 1930 Broadway musical “Girl Crazy”, where it was introduced by Ethel Merman in her Broadway debut. While Ginger Rogers made her debut here as a leading lady, Ethel Merman got the press. The Red Nichols Band, including Benny Goodman, Glenn Miller, Jack Teagarden, Jimmy Dorsey, and Gene Krupa, played the music and had jam sessions during intermissions. George Gershwin acted as conductor for the premier, with Earl Busby conducting for all following performances. “Girl Crazy” ran for 272 performances, from October 14, 1930, to June 6, 1931. Red Nichols and His Five Pennies’ recording went to number five on the charts. “I Got Rhythm” was George Gershwin’s favorite of all the songs he created for Broadway musicals; his last concert work “The ‘I Got Rhythm’ Variations” was written for a 1934 concert tour with the Leo Reisman Orchestra, conducted by Charles Previn, to celebrate the tenth anniversary of “Rhapsody in Blue”.

George Gershwin (Sep 26, 1898 – Jul 11, 1937) left school at age fifteen to work as a song plugger and writer; his first major success was “Swanee” in 1919, with lyrics by Irving Caesar. Al Jolson decided to sing it in one of his shows after hearing Gershwin play it at a party. His composed his first major classical work, “Rhapsody in Blue”, in 1924. In that year he also joined his older brother Ira to write the musical comedy “Lady Be Good”, which introduced the songs “Fascinating Rhythm” and “Oh, Lady Be Good”. He wrote “An American in Paris” during that stay. George and Ira then went on to write “Show Girl”, “Girl Crazy”, “Of Thee I Sing” and “Porgy and Bess”. In 1936 George moved to Hollywood, where RKO Pictures commissioned “Shall We Dance”, which would star Fred Astaire and Ginger Rogers. On July 9, 1937, he collapsed and was rushed to Cedars of Lebanon Hospital where he fell into a coma. Doctors there removed a large brain tumor, but Gershwin died that morning, devastating friends, relatives and fans across the country.

Ira Gershwin (Dec 6, 1896 – Aug 17, 1983) attended high school in New York City, where one of his closest friends was fellow student E. Y. “Yip” Harburg. George and Ira’s 1931 musical “Of Thee I Sing” won the first Pulitzer Prize ever given to a musical. George and Ira’s opera “Porgy and Bess” is considered by many to be the best American opera written to date. Ira never recovered from the sudden death of his brother and is said to have never again believed in God. Ira did continue to write, collaborating with composers Kurt Weill, Jerome Kern and Harold Arlen. Ira was inducted into the Songwriters Hall of Fame in 1971.