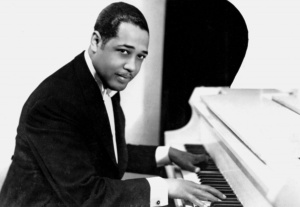 Duke Ellington (Apr 29, 1899 – May 24, 1974), composer, pianist and orchestra leader, became one of the best known people in American jazz. He assembled orchestras of virtuoso musicians, wrote arrangements which highlighted their greatest skills and talents and kept them together for many years. He wrote or collaborated on over a thousand songs, three sacred concerts, toured many times in Europe, made hundreds of recordings, earned 14 Grammy Awards and received the Presidential Medal of Freedom in 1969, received France’s highest civilian honor, the Legion of Honour in 1973, plus a posthumous Special Pulitzer Prize for lifetime contributions to music in 1999.

Irving Harold Mills (born Isadore Minsky; Jan 16, 1894 – Apr 21, 1985), publisher, musician, singer, lyricist and jazz artist promoter, sold first ties, then wallpaper to help support his family after his father died. As a page boy first at Shanley’s, then at the Friars, he got to meet many actors and vaudevillians, but couldn’t see or hear them perform, so got a job as an usher.  Some of the acts asked him to get professional copies of the latest tunes from the publishing houses, where he was then asked to become a song-plugger. He moved with his family to Philadelphia, where he became a demonstrator at Snellenberg’s Department Store. He went back to Philadelphia and worked for Leo Feist, Music Publisher, until the company folded in 1919. He and his brother Jack then formed Mills Music, Inc., which became the largest independent music publisher in the world. Since most well-known writers were already contracted to pre-existing publishers, they had to search for new writers. Mills continued to demonstrate songs with small orchestras, eventually putting together 36 different combinations, starting with Fletcher Henderson. One night he went to the Kentucky Club, where he was introduced to a little band from Washington, D.C. led by Duke Ellington. Mills signed Ellington up the very next day.

Later, while looking for an ingénue to sing, he heard of Blanche Calloway in Chicago, who was singing in a revue at a cafe and refused to go to New York unless her brother could come with her. When asked what he did she said “He sings a good song and he dances very good. But, the proprietor didn’t want to use him in the review so he made him a bus boy.” Mills arranged for an audition after the last show, signed her brother Cab Calloway up immediately and took them both to New York. Mills and Cab Calloway wrote “Minnie the Moocher” and while Mills was with Ellington in California, heard that this was a huge hit at the Cotton Club, so immediately returned to New York and recorded it. He became head of the American Recording Company, which later became Columbia Records. He was one of the first to record integrated bands, introduced the band-within-a-band concept, and formed several record labels. For a time he was singing daily at six radio stations, plugging Mills tunes, accompanied by pianists including Jimmy McHugh, Sammy Fain and Gene Austin. Mills produced one motion picture, “Stormy Weather” in 1943, which included Lena Horne, Cab Calloway, Fats Waller, the Nicholas Brothers and Bill “Bojangles” Robinson. While he had a contract to do other movies, he found it “too slow,” so continued finding, recording and plugging music.