Jimmy van Heusen and Johnny Burke wrote “Like Someone in Love” in 1944 for the movie “Belle of the Yukon” (1944). Dinah Shore played a dance hall singer who introduced the song, while Bing Crosby’s 1945 release went to #15 on the charts and it has been a jazz standard ever since. Crosby was instrumental in getting Jimmy van Heusen (1913-1990) and Johnny Burke (1908-1964) assigned to six of seven road movies as well as the title tune of “Going My Way” (1944).

Jimmy van Heusen started writing music while in high school, attended Syracuse University with Jerry Arlen (Harold Arlen’s younger brother) and in 1940 alone wrote 60 songs , many of them hits. This was also the year he began writing with Johnny Burke and co-founded their own publishing firm BurVan, Inc. Having moved to Hollywood, the team wrote songs including “Moonlight Becomes You” (1942), “Swinging on a Star” (1944) and “Personality” (1946). After Burke retired in 1956, van Heusen wrote more award-winning songs with Sammy Cahn.

Johnny Burke’s first big success was the 1936 “Pennies From Heaven”, written with Arthur Johnston and performed by Bing Crosby. Burke collaborated on 400 songs and 42 movies and once had five songs on the Hit Parade at the same time. His 1955 lyrics for Erroll Garner’s “Misty” (1954) went on to become a million-selling recording by Johnny Mathis. 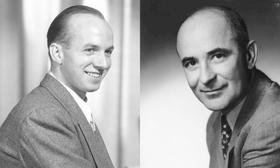