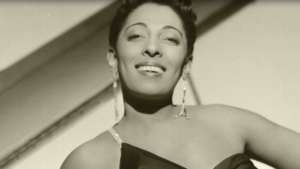 Carmen McRae (April 8, 1920 – November 10, 1994) was one of the most influential jazz singers of the twentieth century. Born in Harlem, New York, to Jamaican immigrants, she grew up in a home filled with music and started studying piano when eight years old. Having won an amateur talent competition at the Apollo Theater, she came to the attention of Teddy Wilson and his wife Irene Kitchings, which led to her meeting Billie Holiday when 17 years old and to Holiday’s recording one of McRae’s early songs “Dream of Life” in 1939. McRae played piano at Minton’s Playhouse, where she sang as a chorus girl and met Dizzy Gillespie, Oscar Pettiford and Kenny Clarke. In 1944 she had her first major job as a pianist here with Benny Carter’s big band, worked with Count Basie and made her first recording as a pianist with the Mercer Ellington Band, under the name Carmen Clarke, having married Kenny Clarke that year. She became associated with Decca and released twelve albums with them. She moved to Chicago from 1948 to 1952, during which period she developed her own distinctive piano style. Having returned to New York in the early 1950s she was voted Best New Female Singer of 1954 by DownBeat magazine and released her first solo album in 1955. In her fifty years of touring and recording she released over 70 albums, was nominated for five Grammies  and won numerous awards, including the 1994 National Endowment for the Arts Jazz Fellowship award for lifetime achievement.  She was especially noted for the skill with which she interpreted lyrics. “Every word is very important to me,” she said. “Lyrics come first, then the melody. The lyric of a song I might decide to sing must have something that I can convince you with. It’s like an actress who selects a role that contains something she wants to portray.”

She always included at least one song associated with Billie Holiday in her performances and created  the 1983 album “For Lady Day” in her honor. She acted in a number of movies and performed the title song of the 1966 hit “Alfie” as well as appearing in television programs, including “Roots” and appeared on “Piano Jazz” with Marian McPartland in 1985.

Below is an interview with Eric Gunnison, pianist for Carmen McRae.