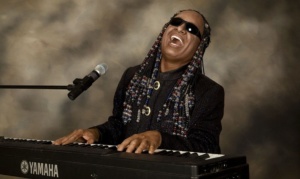 Stevland Hardaway Morris ,né Judkins, (May 13, 1950 – present) is one of the most successful songwriters and musicians ever, having recorded more than 30 US top ten hits and winning 25 Grammy Awards (the most ever by a solo artist), as well as a Lifetime Achievement Award, an Academy Award and inductions into the Rock and Roll Hall of Fame, the Songwriters Hall of Fame and the Rhythm and Blues Hall of Fame.

The third child of Calvin Judkins and Lula Mae Hardaway, songwriter, his parents divorced when he was four years old. His mother then resumed her maiden name and changed his last name to Morris. Berry Gordy, Jr. renamed him “Little Stevie Wonder” and published his initial recording when Wonder was twelve years old. At the end of 1962 Wonder joined the Motortown Review, with whom he toured the “Chitlin’ Circuit”. A 20-minute performance at the Regal Theatre in Chicago was released the following year as “Recorded Live: The 12 Year Old Genius”and the song “Fingertips” from that album, released as a single hit No. 1 on the Billboard Hot 100 when Wonder was 13, and made him the youngest artist ever to top the chart. It was the first song to simultaneously hit No. 1 on the R&B charts. Proficient on piano, organ, harmonica, and drums, by 1964 he was no longer known as “Little” and in 1966 his song “Uptight (Everything’s Alright),” was released to great acclaim. He had also begun working in the Motown songwriting department in the mid-1960s, where he wrote “Tears of a Clown”, which was a major hit when re-released in 1970 and led Smokey Robinson to reconsider leaving the Miracles. Hits in the late 1960s included “I Was Made to Love Her”, “For Once in My Life” and “Signed, Sealed, Delivered I’m Yours” (his first ever self-produced song).

Wonder went independent on a couple of albums, having allowed his contract with Motown to lapse, before returning in 1972 with “Music of My Mind”, which addressed social, political, and mystical themes as well as standard romantic ones and signaled the beginning of a long association with “Tonto’s Expanding Head Band” (Robert Margouleff and Malcolm Cecil). The late 1972 album “Talking Book” featured the No. 1 hit “Superstition” which showcases the Hohner Clavinet keyboard, an electronically amplified clavichord,  also used on “We Can Work It Out” (1971), “Higher Ground” (through a Mu-Tron III filter), “Superstition” (1972), “You Haven’t Done Nothin'” (1974) and “All Day Sucker” (1976). He has used electronics such as this on every subsequent album. The 1973 album “Innervisions”, with “Higher Ground” and “Living For the City” received three more Grammy Awards, including Album of the Year and is ranked #23 on Rolling Stone‘s “500 Greatest Albums of All Time”. Wonder also began touring with the Rolling Stones, which  contributed to the success of “Superstition” and “You Are the Sunshine of My Life”, two songs which won three Grammy Awards. He won two consecutive Grammy Awards, in 1974 for “Innervisions” and in 1975 for “Fulfillingness’ First Finale”. In 1976 Paul Simon, winning the Album of the Year Grammy for “Still Crazy After All These Years”, said “I’d like to thank Stevie Wonder, who didn’t make an album this year.” The 1984 song “I Just Called to Say I Love You” won the 1985 Academy Award for Best Song, which Wonder accepted in the name of Nelson Mandela, whereupon the Government of South Africa banned his music from all radio stations there. In the same year the United Nations Special Committee Against Apartheid honored him for his stance against racism in South Africa. In 1999 he was awarded the Polar Music Prize Lifetime Achievement by the Royal Swedish Academy of Music. He was named a United Nations Messenger of Peace in 2009, the same year he was awarded the Gershwin Prize for Popular Song from the Library of Congress.