Stories of Standards: “There Will Never Be Another You”

“There Will Never Be Another You” (1942) was written for the 20th Century Fox movie “Iceland” (1942), a followup to the 1941 movie “Sun Valley Serenade”. Both starred Sonja Henie and John Payne but the song became widely known only after Chet Baker’s 1954 recording and has been a standard of jazz ever since.

Harry Warren (1893-1981) was the first major American composer to write primarily for film. After learning accordion and drums he taught himself to play piano and by 1915 was working at Vitigraph Motion Picture Studios. He wrote scores for 18 films by Busby Berkeley. Nominated for Academy Award for Best Song 11 times, he won three Oscars ( for “Lullaby of Broadway”, “You’ll Never Know” and “On the Atchison, Topeka and the Santa Fe”). His “Chattanooga Choo Choo” was the first gold record ever. He wrote over 800 songs; his music was featured in more than 300 films.

Mack Gordon (1904-1959) was born in Warsaw and moved to New York City with his parents when four years old. During the 1920s and 1930s he appeared in vaudeville as an actor and singer, but maintained a focus on songwriting throughout this period. With Harry Revel he wrote “You Made Me Love You” for the Ziegfield Follies of 1931”. Having moved to Hollywood in 1933, he formed a partnership with Harry Warren which produced numerous hits, including “Serenade in Blue”, “Chattanooga Choo Choo” and “I Had a Gal in Kalamazoo”. With Josef Myrow he wrote “You Make Me Feel So Young” (1946), long associated with Frank Sinatra. 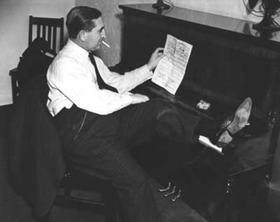