Stories of Standards: “You Don’t Know What Love Is” 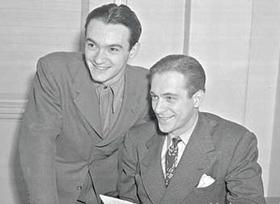 Tune in to Jazz with Victor Cooper – weekdays from 6-9 a.m. MT – for Stories of Standards to hear our favorite versions of this song all week long staring Monday, January 15!

“You Don’t Know What Love Is” (1941) was written by Gene de Paul and Don Raye for the 1941 Abbot and Costello film “Keep ‘Em Flying”, with Carol Bruce as the vocalist but was dropped before the film was released. The song was then used in the 1942 film “Behind the Eight Ball”, again sung by Carol Bruce.  It entered the jazz lexicon in the 1950s and has stayed there ever since. Written in G minor, melody and lyrics are intensely melancholic and compelling.

Gene De Paul (1919-1988) started as a piano teacher and became a pianist in dance orchestras before going on to sing and arrange music for theater. He then went on to focus on Hollywood film scores; he collaborated with Don Raye on several Abbot and Costello films, including the songs “I’ll Remember April” (1942) and “Cow Cow Boogie” (1943). He collaborated with Sammy Cahn for “Teach Me Tonight” (1954) and Johnny Mercer (score for the 1954 film “Seven Brides for Seven Brothers and the 1956 Broadway musical “L’il Abner”). Both De Paul and Raye were inducted into the Songwriters Hall of Fame in 1985.

Don Raye (1909-1985) began his musical career as a dancer and won state championships in both Charleston and Black Bottom categories while still a teenager. After some time in vaudeville he went on to write songs with collaborators including Sammie Cahn, Saul Chaplin and Jimmie Lunceford. With Hughie Prince, he wrote “The Boogie Woogie Bugle Boy of Company B” in January 1941 before joining the Army; upon his return he worked with Gene de Paul at Universal Studios. They also wrote “Beware the Jabberwock” for Disney’s “Alice in Wonderland”, which was not included in the original release of the film, but was included in later releases. A writer of great versatility, he also co-wrote “The Ballad of Thunder Road” with Robert Mitchum and a 1971 collection of poems “Like Haiku”.