Tune in weekday mornings to hear our favorite versions of “Joy Spring.” Rodney Franks presents Stories of Standards Monday through Friday at 7:50 and 8:50 am! 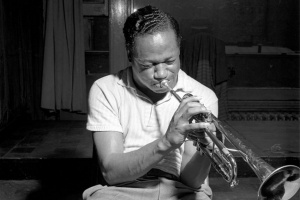 Clifford Brown wrote “Joy Spring” in 1954, naming it for his wife, Larue, as “Joy Spring” was his nickname for her. He first recorded the song on August 6, 1954, in two takes, with Harold Land on tenor saxophone, George Morrow on bass, and Max Roach on drums.

Nicknamed Brownie, Clifford Benjamin Brown (Oct 30, 1930 – Jun 26, 1956) won Down Beat magazine’s New Star of the Year poll in 1954 and was inducted into the DownBeat Hall of Fame in 1972. As a child, he and his three brothers were in a vocal quartet, and when thirteen he was given a trumpet and lessons. He was a math major at Delaware State University before transferring to Maryland State College. He played in the jazz-oriented Delaware State Band before injuries sustained in a 1950 car accident sidelined him for a year. His recording debut was made in 1952 with Chris Powell’s Blue Flames; he spent some time in 1953 with Tadd Dameron, then with Lionel Hampton’s band, touring Europe and leading some recording sessions. With Art Blakey’s quintet in 1954, he made some recordings and later that year formed a quintet with Max Roach, Harold Land, Richie Powell (brother of Bud Powell), and George Morrow. The group, whose first album was titled “Clifford Brown & Max Roach”, was described by The New York Times as “perhaps the definitive bop group until Mr. Brown’s fatal automobile accident in 1956”. The editors of the Encyclopedia Britannica referred to his “lyricism, clarity of sound and grace of technique” as primary characteristics. The crash which ended his life, along with that of pianist Richie Powell and Powell’s wife Nancy, is regarded as one of the great tragedies of twentieth-century jazz.