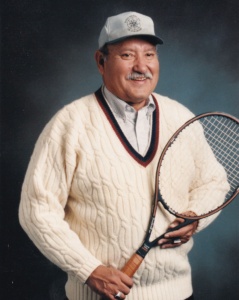 Colorado lost a tennis champion, educator, public servant and gentleman when Daniel “Big Dan” Luna died, on Oct. 21, at his home in Denver. What Dan accomplished in 88 years is the stuff of legend – from lunch with Eleanor Roosevelt to encounters with Bertrand Russell and his idols Ricardo “Gorgo” Gonzáles and Arthur Ashe, who after an exhibition match at the Broadmoor, favorably compared Dan’s serve to Gonzáles’ effortless lightning wooden-racket tornado.

Dan destroyed the stereotype of dumb jocks. Pulverized it like the Renaissance man he was. Like a rocket serve at ad-in, set point.

Dan Luna’s story, like many an athletic tale in Colorado, begins in Pueblo in 1932 when he was born to Sista Ortiz and Francisco Luna who emigrated to Colorado in 1917 at the end of the lengthy armed conflict of the Mexican Revolution. Don Francisco, who spoke no English, went to work as a steel worker in the Pueblo mill. Dan’s five siblings—Carlota, Guadalupe, Francisco, Marge and Dr. Faustino Carlos—could be the subject of another American success story, featuring art, military service, athletics (tennis, but also football, boxing and wrestling), teaching, nursing and public service.

From 1948 to 1950, Dan was a member of the Pueblo Central High School varsity tennis and debate teams, yet the highlight of his youth was when he got his first library card at Pueblo’s McClelland library. Some jock.

“Books take me places,” he told his third of six children, Mark, many years later.

Dan was the first Hispanic to win the state CHSAA No. 1 singles championship, defeating Garth Jones of Boulder High 6-2, 7-5 on the CU courts in the spring of 1950. That propelled Dan to a partial athletic scholarship, while his acumen as a high school debater won him another partial ride; he was on his way to becoming one of nine Chicano undergraduates at the 10,000-student Boulder university.

The late, great Pueblo Chieftain sportswriter Dave Socier wrote of Dan back in 2008:

As a kid growing up in a tough steel town, Dan had to overcome racial taunts, not only as a Latino, but one in a white T-shirt and shorts, playing the “gringo” game of tennis.

Dan shrugged it off as he flourished. The final validation of all places, came from the Pueblo Central Wildcat football team, a gritty, hard-nosed bunch. He won them over to a point. They not only rooted for him, but went to his matches.

And many years later, a 17-year-old Mark Luna, the No. 1 singles player at Denver East High School, would walk from his house on 7th & York, tennis bag on his back, en route to the Denver Tennis Club at 4th and Forest. Too often, a cop would stop him and say, “You know you don’t belong in this neighborhood.” But because of his dad, Mark did belong.

Mark and his sister Susan are still members of the DTC, where Mark serves as a Senior Professional at the oldest and classiest ongoing racquet club (since 1928) in Colorado. Mark also was the first Coloradan and Mexican-American to teach at the International Tennis Hall of Fame in Newport, RI. He represented the DTC in 2015 at the Colorado State Open, winning the Over-55 mixed doubles title at Gates Tennis
Center. Fittingly, his partner was a Pueblo athlete and DTC member, Anne Vento Beblavi, winner of the first female Steinmark Award in 1974, presented by Colorado Sidelines. Vento claimed three state singles championships for Pueblo Centennial from 1972 to 1974 and went on to play four years at the University of Arizona.

Armed with the advice his father had given him to allay his pre state high school tournament jitters (“Da te valor, hijo”/ “Give yourself courage, son”), Dan took CU by storm.

Dan and Tooley started a Conference on World Affairs at CU which afforded Dan the opportunity to meet featured speaker Eleanor Roosevelt whom he was assigned to pick up at Stapleton Airport. The longest-running First Lady (1933-45) asked him on the ride to Boulder, “Young man, have you eaten yet? Then let’s stop for lunch.” Eleanor no doubt had many more memorable quotes but to a college kid any sentence with “lunch” in it is unforgettable.

Another benefit of CU’s impressive academic diversity was a special summer Ivy League Law Prep in which noted professors from back East were invited to lecture the best and brightest CU students. Dan was in a class taught by Bertrand Russell. The family story has it that Dan suggested to the 1950 winner of the Nobel Peace Prize for Literature that he had found a weakness in one of Russell’s books. After class, Russell put his hand on Dan’s shoulder and said, “Very true. I was thinking of revising that chapter.”

Added to the Roosevelt-Russell-Ashe triumvirate of mega famous people Dan met were J.F.K. and M.L.K., whom he met at a National Democratic Party dinner, and his idol Ricardo (known to the insensitive as “Pancho”) Gonzáles whom he corralled after watching him play an exhibition match in Aspen.

Dan is survived by a brood of six predictably brilliant, artistic, tennis-loving children (oldest 67 to youngest 52): Daniel “Little Dan”, Bob, Mark, Richard, Erick and Susan. Their mother, Jessica “Jessie” Martinez Luna, Big Dan’s high school sweetheart who died after a battle with cancer in 1982, provided the artistic spark in their lives. Daniel and Bob make their livings as locally well-known full-time artists, while
Richard, an accountant, plays tennis and paints pastels in his spare time. Erick, a special education teacher in Aurora is a talented poet and tennis player. Both Erick and Richard played No. 1 Doubles at Denver East.

Mark and Susan (also a No. 1 singles player at Denver East), while arguably the most talented tennis players among the siblings (frequently contested at family picnics at Congress Park and City Park) also are accomplished artists. Mark’s paintings were recently featured in a month-long exhibit at the History Colorado museum on Broadway as part of its Dia de Los Muertos celebration. Just up the street at the
Denver Art Museum (is this too much culture for the MHSM readership?) their mother’s favorite artist, Frida Kahlo, is featured along with Kahlo’s husband Diego Rivera and other Mexican artists in Mexican Modernism from the Jaques and Natasha Gelman Collection, which runs through January 24.

Susan displayed her mother’s 46 embroidered soft-sculpture dolls “Images of Women” at History Colorado last February. In 2016, Susan founded Lunapparel which features the Art-in-Motion line of athleisure wear featuring art that is culturally unique to the Luna family, particularly the designs of niece Jessica and brother Dan’s regional images. If you’re tired of this gray world, you need to check out the Lunapparel website, which explodes with vibrant colors.

With his kids, Big Dan founded Luna Tennis, Inc. of Colorado, the first Latino-managed nonprofit tennis agency in the state, which for five years in the 1990’s offered free tennis lessons to kids mostly in north and west Denver.

It’s fortunate Dan wasn’t into self-aggrandizement. Can you imagine getting one of those Christmas letters from Dan and Jessica in which they mention a few of their kids’ accomplishments? Just after you sent yours out with news that Buffy is out of rehab and Royce finally got his GED.

After graduation, Dan returned to Pueblo Central High School where he taught language arts, social studies and Spanish, while coaching the Wildcat tennis team from 1954 to 1956. He also coached the Pueblo South tennis team in 1957 and was hired as the head pro at the Pueblo Country Club. He later served Pueblo with a term on the District 60 school board, executive director of the Pueblo Housing Authority, and commissioner of the Colorado State Fair.

You can be excused if you’re hearing the soundtrack for “Forest Gump” in the background. As Aretha would say, “R-E-S-P-E-C-T,” for a man who succeeded in so many diverse endeavors.

Unlike Forest Gump’s life, Dan’s was real. Steel real. But like Forest, he was as unpretentious as pot metal. Susan, the youngest of Dan’s kids and raised by the widowed Dan (along with lots of Martinez and Luna aunts and uncles) from her eleventh year, remembered, in mourning, Dan’s later years, rather than his halcyon days of athletic and professional achievement.

I’d pick him up at his apartment and we’d go out for coffee or to the Tattered Cover bookstore or to an art show. He was no longer climbing the professional ladder and he was relishing his family relationships which had been sacrificed during his trip up that ladder. He always made the same inside joke when I reminded him to put on his seat belt.

He still had that graceful style that he’d always had, on and off the court. More grace now than fire. He was still the man who had talked to politicians at the highest level and the guy behind the counter at the 7-Eleven and made them both feel important and that they mattered.

Dan Luna lived the kind of life we all wish we could live. A distinctly Colorado life. A life that mattered.

AUTHOR’S SPECIAL THANKS TO:
Rich Hillway, undisputed master historian of Colorado and international tennis. Rich won two state tennis titles in the same year. As a junior at Greeley High he won the state championship in the spring of 1959, then repeated the feat in the fall of 1960 when CHSAA moved the season from spring to fall. A Boettcher scholar, he went on to play No. 1 singles for C.U. He is the leading historian in the world on the
beginnings of tennis in the 1870’s and co-authored “The Birth of Lawn Tennis” with Bob Everitt of England.