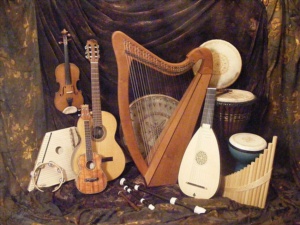 This Sunday The Jazz River traverses the tributaries of Celtic music, a music not normally associated with Jazz. It’s a nice challenge to put the show together. While the Celtic people inhabited parts of western Europe as tribes as early as the 7th or 8th century BC, and they no doubt made their own music, as we’ve come to understand it, Celtic music dates back to the 1600s. Principal instruments include flutes, harps, violins, bagpipes, guitars, and hand drums, along with others. Musically, Celtic music differs from other types because it isn’t played in harmony but rather by ensembles using the melody instruments to play in octaves.

Major countries producing the majority of Celtic musicians include the British Isles, western parts of France as well as the Galicia and Asturias regions of Spain. But there are fascinating cross-pollinations happening fusing Celtic with African, Jamaican, and yes, even Jazz.

Not surprisingly, Celtic music had a strong influence on the development of both American folk and country music. It also differs from jazz inasmuch as it doesn’t employ blue notes, rarely uses minor keys, and while there is improvisation, its flights of imagination are bound within tighter structures than jazz. Still, listen closely and Celtic music lends itself to jazz accents as well as its shared interest in drawing from different influences from the wider world. This makes it a perfect stopover along The Jazz River.

Tune in Sunday, October 31, at 5 pm, when The Jazz River takes you deep into the Celtic World. Only on KUVO Jazz.

The Jazz River — Let's Get Lost