The Jazz River—Music from the Red Hot Organization 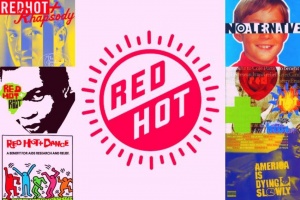 In 1989, while the world was being ravaged by the HIV/AIDS pandemic, Leigh Blake and John Carlin, both involved in the downtown New York creative arts scene that was devastated by the AIDS epidemic, joined forces to create the Red Hot Organization. Its mission was to use popular culture to raise money and awareness to fight AIDS. With backgrounds in both visual and performing arts, the couple began enlisting high-profile musicians and producing records across an incredible diversity of genres and with an equally incredible list of performers. Over their 25-year existence, they produced 20 compilation albums, videos, television programs, and other multimedia, involving more than 500 artists, producers, and directors. Their efforts raised millions of dollars, supported other groups and organizations such as —ACT UP and T.A.G (Treatment Action Group) — and in doing so helped bring attention to and reduce the stigma around AIDS worldwide.

Their first recording Red Hot + Blue had pop musicians interpreting the music of Cole Porter. They followed with Red Hot + Dance that targeted the dance club kids, especially vulnerable at the time. In the mid-90s, Stolen Moment Red Hot + Cool was the first of its kind to bring together jazz players with hip-hop artists. Over time their reach went international Silencio=Muerte, Red Hot + Latin, Red Hot + Rio (two volumes), and Onda Sonora Red Hot + Lisbon (music from Portuguese speaking nations) and focused attention on the broader world. They produced Red Hot + Riot, music from the Nigerian superstar and political activist Fela Kuti, who himself died from AIDS. Red Hot + Country, Red Hot + Indigo (all Ellington), and Red Hot + Bach showcase how incredibly broad was their reach and how innovative their creativity.

In the early 2000s, it became clear that the music industry had changed dramatically, and as non-profit they could no longer raise money selling recordings. With the help of others they managed, to put out a few final collaborations, including a 3cd set of Grateful Dead covers before moving on to other work and service. All this had me wondering what kinds of creative and philanthropic efforts from the music community will come out of our current COVID pandemic.

For now, tune in on Sunday, May 30 from 5-6 pm as The Jazz River presents a look back at the Red Hot Organization. Only on KUVO JAZZ.

The Jazz River has the Blues