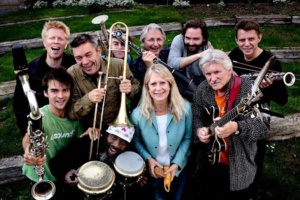 What happens when Ellington and Mingus go bar-hopping in Gambia, and enter a club where Sun Ra is spinning Danish, Chinese, and Indian folk music and the stage act is courtesy of Frank Zappa?

That’s kind of close to describing the almost 50-year career of guitarist and bandleader Pierre Dørge and his band New Jungle Orchestra. And yet, in this country, few people have even heard of him. An immensely gifted guitarist who started off in the 1960s playing modern and Free jazz, but who could whip out blues licks with the best of them, Dørge became one of Denmark’s most prolific artists with an incredible range of musical interests and influences that he and his band blended effortlessly into an utterly unique style. Formed in 1980 and named after the 1920’s version of Ellington’s band that held court at the Cotton Club in Harlem, the New Jungle Orchestra is a big band that can and does play anything and everything. As talented as his guitar playing is, over the years, Dørge has shown his other gifts for leading an orchestra that combines intricate charts with extra space to blow freely.

Over his career, he has played with Don Cherry, David Murray, Harry Beckett, Johnny Dyani, Horace Parlan, Jim Pepper, Ray Anderson, and Hugh Masekela to name a few. The core of the New Jungle Orchestra has been with him since the beginning. They have literally performed all over the world in such far-flung locales as Hanoi, Saskatoon, Accra, Shanghai, and Chicago. As official cultural representatives of the Danish government, their extended stays in China, India, Bali, West Africa, have produced recordings steeped in the folk traditions of those nations but always with their singular sensibilities. And their stage show is full of wild humor, camaraderie, free expression, and deeply swinging.

Sunday at 5 pm, The Jazz River takes you into the worlds of Pierre Dørge and New Jungle Orchestra, only on KUVO Jazz.

Sunday, December 5, at 5 pm, The Jazz River takes you into the worlds of Pierre Dørge and New Jungle Orchestra. Only on KUVO Jazz.