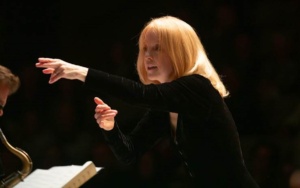 Composer, conductor, band leader, 12-time Grammy nominated, 5-time winner in Jazz, Classical, and Pop categories. Maria Schneider is a 2019 recipient of NEA Jazz Master status. She has held her Orchestra together for over 30 years and is a tireless champion of artists for control of their digital and creative copyrights against Internet piracy. And yet, how many people know her music? 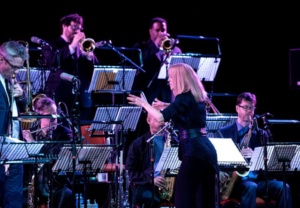 Born in rural Minnesota and growing up around nature influenced her composing. As luck would have it, a widowed woman with a background in Classical and Stride piano moved to town and became her music teacher. Beginning at age 5 she learned classical music as well as music theory. Although she also learned Stride and boogie-woogie, she came to jazz later while graduating from University of Minnesota with a degree in composition. Her graduate work was at Eastman She moved to New York where simultaneously she studied with bandleader Bob Brookmeyer and as assistant and arranger for legendary composer Gil Evans for the final three years of his life.

Her orchestra is loaded with some of the most exciting players on the scene today, many who are band leaders themselves. Her sound is totally her own, deeply nuanced, often pastoral and meditatively evocative. Most recently, she has also brought significant bite and rage as she’s used her compositions to take on the digital conglomerates Google, YouTube and Spotify.

Tune in to a very special edition of The Jazz River—Weeknight Edition—Tuesday, November 24, from 6-8 pm. We’ll celebrate her 60th birthday and you’ll hear the full range of her compositional genius showcasing her unique musical approach and her outstanding bands. Only on KUVO JAZZ.