The Night Beat — Lee Morgan, Live at the Lighthouse 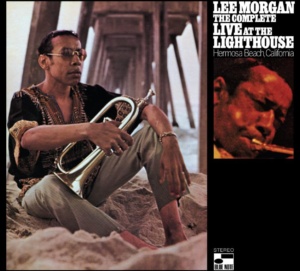 All month long your host Doug Crane has been treating you to music from the recently released and definitive version of Lee Morgan’s “Live at The Lighthouse.” Originally available as a two-record set in 1971 and as an expanded three-CD set in 1996, this limited edition box set includes either eight CDs or 12 LPs.

This recording is significant for a number of reasons.

While Lee Morgan had participated in a number of live recordings as a sideman (Art Blakey most noteworthy), this was the only live album that featured Lee as the leader.

It suggests Lee was moving in a different direction musically, perhaps spurred on by bandmate Bennie Maupin who is heard on tenor saxophone, flute, and bass clarinet.

It also enhances its position as one of the most important recordings of 1970 that features a trumpet player as leader. The others include the Miles Davis recording “Bitches Brew”, Woody Shaw’s “Blackstone Legacy” and Freddie Hubbard’s “Red Clay”.

At the time of the Lighthouse recording, the band included Lee Morgan, the leader, on trumpet and flugelhorn, the aforementioned Bennie Maupin, Harold Mabern on piano, Mickey Roker on drums, and Jymie Merritt on bass. Jymie and Lee had been part of Art Blakey’s Jazz Messengers from 1958 to 1961. (If you tuned in my 12/29/2021 program, you heard Lee and Jymie as part of the Messengers quintet that toured Japan in early 1961)

If there is one thing that mars the Morgan Lighthouse recordings, it’s the piano. According to an audience member, the piano simply wasn’t very good. And most often it’s kind of buried in the mix. Why? Due to the use of a 4-track tape recorder and a band of five musicians, a couple of instruments needed to share a track. In this case, it was the bass and piano. As the input levels for the piano were generally too low on the original recordings, the only way to bring up its sound level would have been to excessively boost the bass.

While the subject at hand is the Morgan Lighthouse recordings, it’s worth noting Bennie Maupin appeared on Woody Shaw’s “Blackstone Legacy”. And Woody would take the stage at the Lighthouse in September 1970 as part of Joe Henderson’s quintet captured on Joe’s Milestone album “If You’re Not Part of the Solution, You’re Part of the Problem”. The very first song on the album is “Caribbean Fire Dance”, a song that first appeared on Joe’s Blue Note album “Mode for Joe” from 1966. That recording featured Lee Morgan on trumpet.

Tune in for this final session of Lee Morgan’s “Live at the Lighthouse” on the Night Beat with Doug Crane on Wednesday, January 19, at 8 pm. Only on KUVO JAZZ!