On Stage | Catherine Russell at Vail Jazz at Vail Square 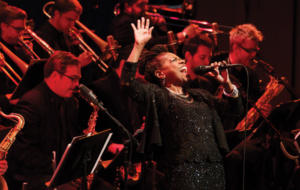 Catherine Russell comes by her talent naturally – the daughter of long-time Louis Armstrong music director Luis Russell and Carline Ray, a pioneering bassist/guitarist/vocalist with International Sweethearts of Rhythm. But she’s earned her own stripes, with a degree from the American Academy of Dramatic Arts, touring dates with David Bowie, Levon Helm, Wynton Marsalis, Dr. John, and more than 200 recording credits.

Her work on HBO’s Boardwalk Empire earned her a Grammy Award, and she sang and appeared in the feature film Bolden. Ms. Russell’s seventh album as a leader, Alone Together (2019), was her first for Dot Time Records.

Experience the authentic and rich voice of Catherine Russell captured this summer from Vail Jazz at Vail Square on KUVO’s performance archive show “On Stage,” Sunday at 4:00 p.m. only on KUVO Jazz.