The baritone saxophonist and bass clarinetist was known for his interesting arrangements, including work on Phil Norman’s 2017 release “Then and Now: Classic Sounds and Variations of 12 Jazz Legends.”  But he was beloved in Vail, where he was an active contributor to the Vail Jazz Foundation’s “Jazz Goes to School” program.

Tony Gulizia, Director of Vail Goes to School, said… “I knew Roger for 36 years and traveled the world with him. He has been a key ingredient in Jazz Goes to School in Eagle County. He was our wood wind instruments representative in our Jazz Goes to School program, working with many thousands of fourth and fifth graders. He contributed to so much in our jazz school.

He was a well-respected arranger, composer and studio musician who worked in L.A.  with artists such as Michael Bublé and Barbara Streisand. He won the Educator of the Year award from the L.A. Jazz Society. He was a marvelous musician, his love for music will be hard to be matched. He passed away yesterday, and I spoke with his wife regarding his last hurrah. He touched many, and I miss him horribly right now.”

Born January 3rd 1941 in Minot, North Dakota, Neumann grew up in Spencer, Iowa and started playing a curved soprano saxophone at a young age under the tutelage of his father, Hugo Neumann, a professional trombonist and saxophone player.

While enrolled in the Berklee School of Music he was offered a job with Woody Herman and played a solo at the Monterey Jazz Festival.

In 1975, he formed Roger Neumann’s Rather Large Band. The band played on his wife Madeline Vergari Neumann’s Grammy nominated CD “This is my Lucky Day”.

Neumann is survived by his wife, vocalist Madeline Vergari Neumann and their children Rico and Gina. 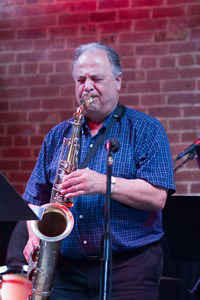