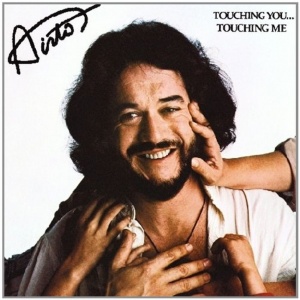 The Vinyl Vault features a 1979 album from Brazilian percussionist Airto entitled “Touching You…Touching Me.” Released on the Warner Brothers label, the album was produced by Airto and overflows with airy, happy Brazilian-inflected jazz interspersed with a little funk.

The musician configurations vary tune by tune and include as many as 12 players on some tracks down to Airto on his own on one tune with various sized bands in between. As is usually the case on Airto records, his wife, vocalist Flora Purim appears on a number of tunes. Other players include Alphonso Johnson on bass, George Duke on keyboards, Herb Alpert on trumpet, Joe Farrell on sax, and Jose Bertrame on keyboards. Bertrame, of the Brazilian band Azymuth, played a much larger role on the album besides simply playing keyboards on a couple of cuts. He also wrote nearly half the songs and arranged many of them as well.

Airto Moreira was born in Brazil in 1941. He got his start with the Brazilian band Quarteto Novo but then moved to the United States and met Miles Davis just as he was embarking on his fusion experimentations and played on the seminal “Bitches Brew.” He hung with the Davis alums becoming a member of early Weather Report and Return to Forever. He has over two dozen albums under his own name and has been a sideman on literally hundreds of others.

Join Geoff Anderson for Airto on the Vinyl Vault, on Tuesday, May 18, at 8:30 pm on KUVO JAZZ.