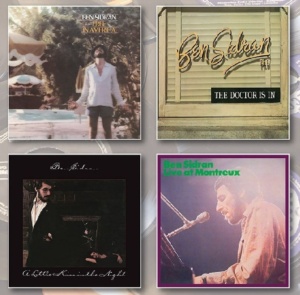 Pianist, singer and composer Ben Sidran’s career spans 60 years (so far) and he even has a new album, “Swing State,” this week on the Vinyl Vault, we’ll look back at what Sidran was up to in the 1970s which was one of the more prolific times of his recording career. On the next Vinyl Vault, we’ll hear tunes from five different Sidran albums, “Don’t Let Go,” 1974; “Free in America,” 1976; “The Doctor is In,” 1977; “A Little Kiss in the Night,” 1978; and “Live at Montreux,” 1978. All the albums were released on the Arista label except for “Don’t Let Go,” which came out on Blue Thumb.

The albums feature a combination of Sidran originals as well as covers, some well-known, others quite obscure. The originals are inflected with Sidran’s wry sense of humor and clever word play. Sidran used many different sidemen on the albums, many of whom are big names now if not when these albums were recorded. Some of the musicians included the Brecker Brothers, Tony Levin, Phil Woods, Blue Mitchell, Arthur Adams, Phil Upchurch, Fathead Newman, Woody Shaw, Bunky Green and many more.