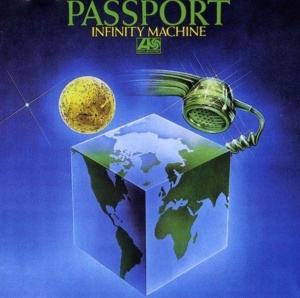 Coming up next week on the Vinyl Vault, it’s the Best of Passport. Passport is a fusion band from Germany that started in 1971 and gained most of its notoriety in the mid-70s. The band has released over 30 albums, including one as recently as 2020. This week we’ll hear tracks from five of the band’s albums mainly released during their 1970s heyday.

Passport was the brainchild of sax man Klaus Doldinger and he’s been the only constant member of the band throughout its existence. In fact, Passport, rather than being a traditional band, has been mainly the vehicle for Doldinger’s creative impulses over the last half-century. And, like most bands with this sort of longevity, the roster of former band members runs into the dozens.

One of the albums we’ll hear from will be Infinity Machine (Atco, 1976), a mid-70s fusion album with plenty of synths and driving rhythms. Iguacu (Atco, 1977) from the following year had the band headed to Brazil. Part of the album was recorded there with Brazilian musicians and, needless to say, the local rhythms found their way into the band’s sound. Doldinger Jubilee ’75 (Atlantic 1975) was a live recording featuring Passport’s members at the time with a number of guest musicians including Les McCann on keyboards and vocals and Philip Catherine on guitar. This one found the band dabbling in a little bluesier sound. Sky Blue (Atlantic 1978) saw significant personnel changes, but the traditional Passport sound continued with synths, sax, and catchy melodies. Finally, Heavy Nights (WEA, 1986) again saw personnel changes and a bit of an updated sound with some understated funk.

Join Geoff Anderson for some German jazz on the Vinyl Vault on Tuesday, February 1, at 8:30 pm on KUVO JAZZ.