Vinyl Vault—Feels Good to Me 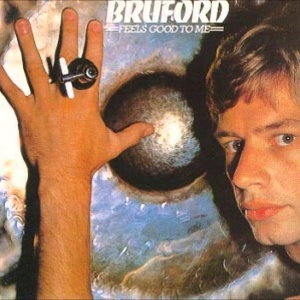 Tuesday, on the Vinyl Vault it’s an album entitled “Feels Good to Me” by drummer Bill Bruford. Released on Polydor in 1977, the record was the first solo album by Yes and King Crimson alum Bruford.

Bruford assembled a crack lineup for the date with Allan Holdsworth on guitar, Dave Stewart on keyboards, Jeff Berlin on bass, Annette Peacock on vocals, and Kenny Wheeler on flugelhorn. Holdsworth was a legendary but somewhat underrecognized, fusion guitarist known for his technical command of the instrument and blazing solos. On “Feels Good to Me,” Holdsworth was on the top of his game laying down numerous high octane statements.

Strangely, England produced two keyboardists named Dave Stewart right around the same time. One found success teaming with Annie Lennox in the Eurythmics. The Dave Stewart on “Feels Good to Me” is the other one. This Dave Stewart was active in the Canterbury scene in England in the 1970s which produced such progressive rock bands as Soft Machine, Caravan and some of the bands Stewart played in including Hatfield and the North and National Health. Stewart also assisted Bruford with some of the compositions, particularly working on the harmonic structures.

Jeff Berlin was new to the scene in 1977 but made a considerable impact on this album. His playing throughout was inventive, often out-front, and always undeniable. Annette Peacock adds an exotic touch with her vocals on about half the tunes. She was consistently delightfully quirky and simultaneously sassy and sultry. Kenny Wheeler appeared only occasionally, but his playing added a silky relaxed vibe to the down-tempo tunes.

By 1977, Bruford had spent several years with each Yes and King Crimson, two progressive rock bands known for intricate, complex arrangements and virtuosic playing. Flickers of those influences can be heard on the album, but Bruford composed all the music and drew more heavily from jazz-rock than his previous bands. The crackerjack musicians on “Feels Good to Me” execute the intricate compositions with precision and flair. Besides drums, Bruford also played vibes on a few tracks in a Zappa-esque way.

Check out “Feels Good to Me” on the Vinyl Vault, this Tuesday at 8:30 pm on KUVO JAZZ.