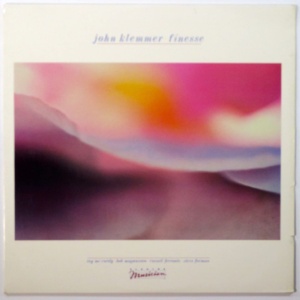 This week the Vinyl Vault goes to the mellow side with a 1983 release from tenor sax man John Klemmer and his album “Finesse.” The album was released on the short-lived Elektra Musician label which promoted itself as a label which allowed musicians to express themselves without corporate interference. The label also prided itself on the high quality/high fidelity records it produced.

John Klemmer had released about two dozen records before “Finesse” covering several different musical styles. He had scored commercial success in the mid-70s with titles such as “Touch” and “Barefoot Ballet” which helped pave the way for Smooth Jazz. “Finesse” leans that direction at times but includes more straight ahead jazz elements.

Klemmer is joined on the album by Roy McCurdy on drums, Bob Magnusson on bass, Russell Ferrante on keyboards and Steve Forman on percussion. Klemmer incorporates the Echoplex that he had begun working with several years earlier. By the early 80s, the electronics together with his technique had formed a distinctive sound.

Join Geoff Anderson this Tuesday, January 19, at 8:30 pm on the Vinyl Vault, only on KUVO JAZZ.