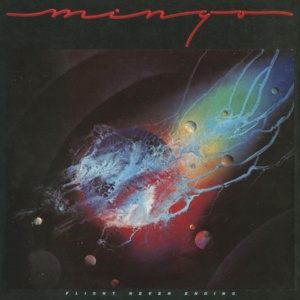 Percussionist Mingo Lewis is one of those guys who seems to show up on about every other album recorded in the 70s. His diverse resume includes stints with Santana, Return to Forever, Al DiMeola, Eddie Palmeri, John McLaughlin, Tito Puente, Miles Davis, David Byrne, Todd Rundgren, James Brown, XTC, Aretha Franklin, Billy Joel, Stanley Clarke, The Tubes and others.

In 1976 he got his shot to record a record under his own name, on Columbia Records no less. He titled the album “Flight Never Ending” and it borrowed heavily from the sounds Al DiMeola was making at the time with a little Santana thrown in for good measure. It wasn’t a commercial blockbuster, but it’s not an album to be missed for fans of mid-70s fusion.

Check it out this Tuesday, June 9, at 8:30pm on the “Vinyl Vault” with Geoff Anderson on KUVO JAZZ.