Vinyl Vault — Ian Carr’s Nucleus, “Out of the Long Dark” 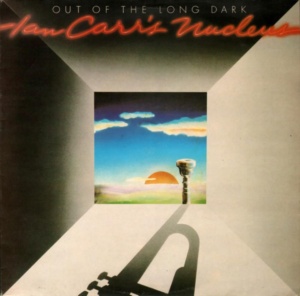 Next time on the Vinyl Vault, we’ll hear some tracks from trumpeter Ian Carr and his band Nucleus and their 1979 Capitol album “Out of the Long Dark.” Carr was a Mile Davis disciple, and this album carried a heavy Davis influence mixing 50s era Davis with 70s jazz fusion.

Besides Carr’s approach to the trumpet, a significant Davis influence is on the track “Selina” which is essentially a reworking of “All Blues.” Carr was so interested in Davis that he wrote two books about him.

Carr’s band, Nucleus, had been together for a few years by the time “Out of the Long Dark” was recorded. Besides Carr on trumpet, flugelhorn and keyboards, Geoff Castle appeared on electric piano and synthesizers, Brian Smith on tenor and soprano saxes, flute and percussion, Billy Kristian on bass and Roger Sellers on drums and percussion.

Carr, April 21, 1933 – February 25, 2009, was born in Scotland. Besides the two Miles Davis biographies, Carr also wrote a biography of Keith Jarrett and was an editor of the “Rough Guide to Jazz.” The Nucleus band released 20 albums and Carr played on albums in other bands and as a sideman on many more.

Check out Ian Carr’s Nucleus and “Out of the Long Dark” with Geoff Anderson on the Vinyl Vault, Tuesday, June 7 at 8:30 pm on KUVO JAZZ.