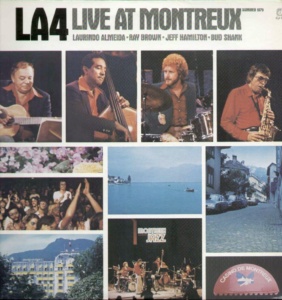 “Montreux” conjures images of jazz greats, immortal performances, and a burning desire to get there for the next festival. The famous Montreux Jazz Festival has been one of the preeminent jazz festivals in the world for decades now, consistently attracting the upper echelons of the jazz world. Innumerable live recordings have sprung from the festival for about as many years as the festival has been in existence.

The LA 4 rolled into Montreux in the summer of 1979 and came away with the aptly titled “Live at Montreux,” a recording on the Concord Jazz label. The LA 4 was a band of band leaders that got together periodically to play live and record. Original members included Ray Brown on bass, Bud Shank on alto sax and flute and Laurindo Almeida on guitar. Shelly Mann was the original drummer, but by 1979, Jeff Hamilton had stepped in as his replacement.

The programme consists of two band originals and several covers including a 14 minute Duke Ellington medley. The professionalism was, of course, of the highest order. And, although each player was (or in Hamilton’s case was to become) a leader in his own right, the ensemble playing evidences a telepathic intimacy among the players.