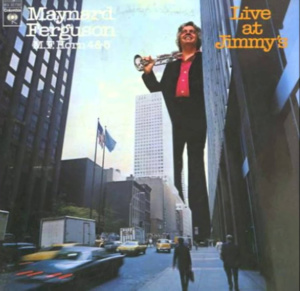 This week’s Vinyl Vault will feature the swinging big band sound of Maynard Ferguson recorded Live at Jimmy’s in 1973. This release on the Columbia label is widely viewed as his best of that era. The band primarily sticks to straight ahead swing rather than the pop, rock, funk and *gasp* disco the band dabbled in shortly after this recording. The two record set was recorded at lunchtime before an enthusiastic audience of music industry personnel. Check out “M.F. Horn 4 & 5, Live at Jimmy’s” on the Vinyl Vault with Geoff Anderseon, Tuesday, January 21 at 8:30 pm on KUVO Jazz.