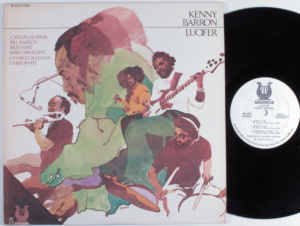 By the mid-1970s, electronic instruments were becoming more and more common in jazz leaving musicians and audiences divided on the wisdom of their inclusion in what had previously been an acoustic music. Some pianists such as McCoy Tyner and Keith Jarrett resisted. Others, particularly the fusion crowd, embraced them whole heartedly. By 1975, Kenny Barron was on the fence. His first love was the acoustic piano, but he began to experiment with the judicious use of electronics integrated with traditional acoustic instruments. He even coined a term for it: Electracoustic fusion.

Barron’s 1975 album on Muse entitled “Lucifer” was the realization of his electracoustic vision. It’s a wildly diverse album ranging from funk, to Latin rhythms to intensive Mahavishu Orchestra style fusion to solo acoustic piano to overdubbed electric and acoustic keyboards. This is also an extremely hard to come by recording, never released on CD. But the Vinyl Vault has a copy and you can hear it Tuesday night, November 19  at 8:30pm on KUVO Jazz.

Vinyl Vault: Asleep at the Wheel