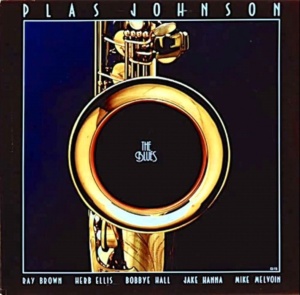 Saxophonist Plas Johnson worked as a session musician for many decades playing everything from rock and soul to pop and jazz. He didn’t just play on other people’s albums, but also played on movie and TV soundtracks, jingles, and commercials. He was in Merv Griffin’s TV showband in the 1970s. One of his most famous parts was playing the sax solo on Henry Mancini’s “Pink Panther Theme” in 1963.

But he wasn’t a strictly behind-the-scenes guy. He recorded about a dozen jazz albums under his own name and we’ll hear one of them on the next Vinyl Vault. We’ll hear a few tracks from his 1976 release on Concord Jazz Records entitled, “The Blues.”

While the blues, as a musical form, greatly influenced the music on the album, it’s primarily a straight-ahead session. It featured Ray Brown on bass, Herb Ellis on guitar, Bobbye Hall on congas, Jake Hanna on the drums and Mike Melvoin on keyboards. The program is primarily jazz standards.

Join Geoff Anderson on the Vinyl Vault, Tuesday, May 17 at 8:30 pm on KUVO JAZZ.