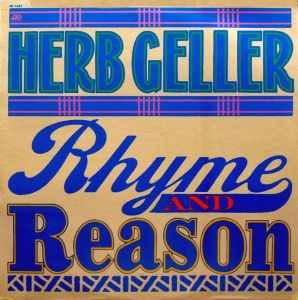 On Tuesday the Vinyl Vault presents a 1975 album from multi-woodwind man, Herb Geller. The album “Rhyme and Reason” was released on the Atlantic label.

Geller was living in West Germany at the time and he was joined on the album by a group of European jazz men including Philip Catherine on guitar. The album was recorded in Hamburg. Other notable guest include Mark Murphy and Earl Jordan on vocals. We’ll hear Murphy on two tracks and Jordan on one.

The album is also notable for Geller’s use of the saxophone chorus. On several tracks, he multi-tracked himself playing several two soprano saxophones, an alto and two tenors for an effect of a layered chorus of horns playing in unison. Besides all those saxes, Geller also played soprano flute, alto flue and bass flute. He also composed all four tunes on the album.

Geller played for many years with the Benny Goodman Big Band. He also spent some time with Zoot Sims, Maynard Ferguson, Shorty Rogers and Chet Baker.

Join Geoff Anderson this Tuesday, July 6, at 8:30 pm for the Vinyl Vault on KUVO JAZZ.