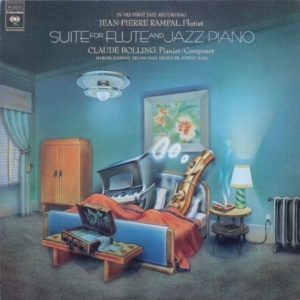 This week the Vinyl Vault acknowledges the passing of French jazz pianist Claude Bolling by featuring probably his best known work, “Suite for Flute and Jazz Piano.” Bolling passed away on December 29, 2020 at the age of 90.

“Suite for Flute and Jazz Piano” was a hit in the 1970s and into the 80s. It stayed on the Billboard charts for nearly 10 years. The record could be called a fusion album; but not a fusion of jazz and rock as that term is usually applied, but a fusion of jazz and classical music. At the time of the album’s release in 1975, Columbia records referred to the music as “crossover,” no doubt to distinguish it from the louder and more bombastic fusion.

“Suite for Flute and Jazz Piano” is somewhat reminiscent of Dave Brubeck’s Blue Rondo a la Turk with the combo deftly switching from a Baroque sound to a swinging straight ahead jazz style. The flute is provided by Jean Pierre Rampal, often considered the premier classical flute player of the 20th Century. A hallmark of the album is Rampal’s precise, yet delicate interplay with Bolling’s piano. Rounding out the quartet are Marcel Sabiani on drums and Max Hediguer on bass.

Nearly as good as the album itself is the cover featuring a cartoon piano and flute in bed together with the flute enjoying a post-activity cigarette. Both the music on the album and its cover inspired sequels including the “Picnic Suite” and “Toot Suite” for piano and trumpet.

Bolling was greatly inspired by Duke Ellington and led an Ellington-esque big band for decades. He also composed scores for movies and television.

Join Geoff Anderson on the Vinyl Vault for some bouncy Baroque-jazz Tuesday, January 5, at 8:30 pm on KUVO JAZZ.