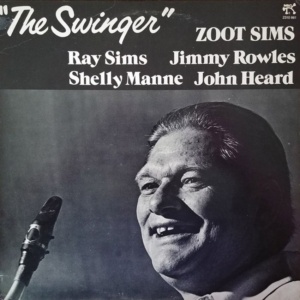 We’ll hear an album from the great tenor sax player, Zoot Sims. The album is “The Swinger,” recorded in 1980 and released the following year on Pablo Records. The album featured Jimmy Rowles on piano who had several productive associations with Sims over the years. Also on the album was Zoot’s brother, Ray Sims on trombone. Rounding out the quintet were Shelly Manne on the drums and John Heard on bass.

Zoot Sims (October 29, 1925 – March 23, 1985) recorded at least 75 albums under his own name and at least that many again as a side man. He began recording on Norman Granz’ Pablo label in 1975, issuing 20 albums for that label. Over his lifetime, Sims played in many big bands including those led by Benny Goodman, Woody Herman, Artie Shaw and Buddy Rich. He also spent time in bands that included Gerry Mulligan, Bucky Pizzarelli, Joe Venuti, Count Basie and Sarah Vaughan.

Check out Zoot Sims and his brother Ray and the album “The Swinger” on the next Vinyl Vault with Geoff Anderson, on Tuesday, June 14 at 8:30 pm on KUVO JAZZ.