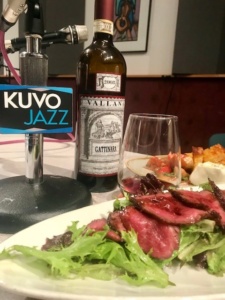 Nathan shared with us how he discovered the Burrata and some secrets to preparing meat, while Tyler discussed how THERE came to be all while enjoying the 2008 red wine that Carolyn brought to the pairing. 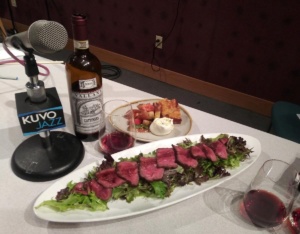 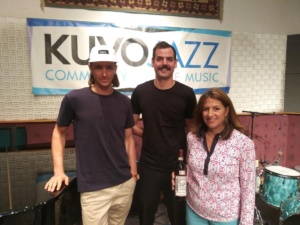 A WORD FROM CAROLYN:

Ahh truffle season is approaching….perhaps this is why chef Nathan at “There” restaurant chose to feature their signature dish of Wagyu Beef over organic greens dressed with balsamic vinegar and truffle oil.  Even though this dish had only a hint of truffle, I wanted to highlight this specialty.  Truffles, the rare, and very expensive fungi should be thoughtfully paired with wine.  Truffles can have such strong and distinctive flavors, so in deciding what to pair with it, I relied on the old saying, “what grows together, goes together”. And while truffles are harvested over the world, France, China, and Oregon, I always think of Italy.  Specifically Piedmont.

Many consumers associate Barbaresco or Barolo with Piedmont.   These are prestigious and famed wines,  where the varietal that makes these regions famous is Nebbiolo.  But that fame and recognition demands price.  However,  you can find other wines made from Nebbiolo, which adhere to similar aging requirements, are also farmed organically and have a very rich history.  In fact, Gattinara, the wine region we are featuring produces minuscule amounts compared with its better-known neighbor. One hundred years ago there were 40,000 hectares planted to Nebbiolo in Gattinara, but crippling disease and an epic hail season decimated the vines.  Gattinara, the largest appellation in the region, declined from a peak of 1,700 vineyard acres a century ago to 260 acres today, according to Lorella Antoniolo.

Due to the proximity of Monte Rosa, the second-highest peak in the Alps, the climate in Alto Piemonte where Gattinara is located,  is distinct from the Langhe hills to the south. Hot days, cool nights and frequent rainfall allow for ripening, but also enhance the elegance of Nebbiolo.

The region’s mineral-rich volcanic and granite soils also differ from the limestone and clay of the Langhe, making for a more acidic rather than alkaline mix in the soil, (as in Barolo) and further enhance the minerally and earthy components in the wines. By law, Gattinara must age at least three years, one in oak or chestnut casks. (Barolo is two years in cask, one year in bottle).

The Vallana family’s roots in Gattinara began in the 18th century back in 1787,  spanning 5 generations of winemaking.  The first winemaker in their history was Gaetano  Perrucconi, who took over in 1787 and began to supply the bishop of Novara with great wines from these crus.

The architecture of the winery reflects the philosophy behind the winemaker. There is very little space for barrel-aging because the main focus of their winery is bottle aging. The Vallana family strongly believes that, even though it takes longer to deliver the wine at an optimal drinking stage, long-term bottle aging helps the wine to develop an elegance that is completely unique.

The grapes are handpicked in the first half of October and they are vinified in large cement tanks. The wine matures in large oak barrels, but it takes a few years in the bottle to fully develop its potential.  Our current vintage is 2008! (Aged wine is another great compliment to truffles’ funky character).

“Nebbiolo is not a wine, it is a drug,” one producer in Piemonte said over lunch, insisting that his name not be attached to such a politically incorrect sentiment. His eyes then lit up as he buried his nose in his glass and inhaled deeply.”

Joy Wine and Spirits will be featuring this unique Nebbiolo from Vallana tonight.  We’ll leave the truffle pairing up to your imagination!

MCA Denver and THE DROP 104.7 Announce Media Partnership in Support of The Dirty South Exhibition