The July presentation of the Denver Film Society’s Women + Film series features a screening of “Lucky Them” starring Toni Collette and Thomas Haden Church.  Writer and producer Emily Wachtel (pronounced wahk-TELL) is in Denver for the screening on Friday, July 11 (4:40 p.m. and 7:20 p.m.) at the Sie FilmCenter, 2510 East Colfax Ave., Denver, 80206.  Wachtel visited “First Take with Lando and Chavis.” 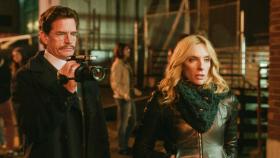 “It’s an un-romantic comedy,” insists Wachtel.  ”My writing partner Huck Botko and I decided that if we were going to do the kind of story I wanted to do, we were going to … go down swinging and try and do something that was the opposite of a rom-com.”

Storyline: a rock journalist (played by Collette) has to track down a mysteriously disappeared rock god, who is also her ex-boyfriend.  Church plays the documentarian along for the journey.  The film, directed by Megan Griffiths, with a role played by Johnny Depp, has received strong reviews at festivals including Toronto and TriBeca.

Music on this feature is by Harvey Mason, “Black Frost” from the CD Chameleon and the title track to Gregory Porter’s CD “Be Good.”