“Woody’n You” | Stories of Standards

“Woody’n You”, written in 1943 by Dizzy Gillespie, was first recorded on Coleman Hawkins’ 1944 album “Rainbow Mist” (named Record of the Year by Metronome Magazine in 1945). “Woody’n You” was dedicated to Woody Herman; according to Joos Visser, this was one of three songs Herman commissioned from Gillespie. Sometimes pronounced “Wouldn’[t] You,” the song was released several times under the name “Algo Bueno” (“Something Good”). The musicians’ union had put Gillespie under a recording ban between 1942’s “Jersey Bounce” and 1944’s Coleman Hawkins recording. For many, the 1947 Dizzy Gillespie big band recording with Gil Fuller’s arrangement that featured Chano Pozo’s drumming and a shout chorus at the end remains the definitive version of the song, while two recordings from 1956 (one by Max Roach and one by Miles Davis) are very significant as well.

John Birks Gillespie (1917-1993), known as “Dizzy” from an early date, became known as a trumpeter, bandleader, composer, arranger, conga player and cultural ambassador. In the early 1940s Gillespie, with Charlie Parker, Thelonious Monk and others created bebop. Quincy Jones said of them “What they did was like nitroglycerine, electricity. They broke all the rules, changed the world concert of American music.” While playing with Cab Calloway’s Big Band Gillespie met a Cuban-American trumpeter and began the explorations that led to CuBop, with the Latin influence still prominent in American jazz. 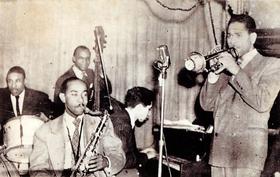