10 of the Most Famous Jazz Composers in History 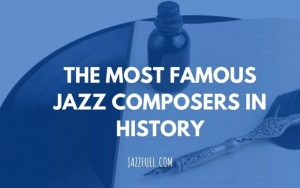 There was a real range – from Jelly Roll Morton back in the early 20th Century, to famous jazz musicians like Charles Mingus, Thelonious and Wayne Shorter who contributed a lot of new tunes.

Perhaps in jazz more than any other genre, there exists an enormous crossover between the most famous composers and the greatest performers. In this article, we look at that select group of musicians who are possibly best-known as jazz composers.

There is a long tradition of jazz musicians taking popular songs of their day – familiar themes from the radio, musical theatre shows or film – and interpreting them as their own. But alongside this, jazz musicians have always composed their own material to play.

This means that the jazz standards repertoire is split roughly into two categories:

This article will look at artists who have contributed to that second category.

They span a range of styles and eras, but all of these musicians have made immeasurable contributions to the lineage and history of jazz composition, and all have written tunes that continue to be performed today.

So, in approximately chronological order, here’s our list of ten of the best jazz composers, with a recommended recording for each one.