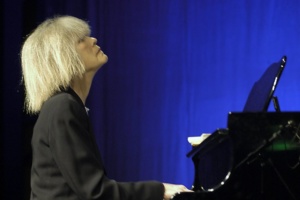 May 18, 2020 — Carla Bley, composer-arranger-bandleader and pianist, is celebrated for her Lifetime Achievement in Jazz by the Jazz Journalists Association, in the 2020 JJA Jazz Awards, the 25th annual honors for excellence in music and music journalism, announced today by the non-profit organization of writers, photographers, broadcasters and new media professionals covering jazz. Stanley Crouch, author, essayist, novelist, advisor to Jazz at Lincoln Center and president of the Louis Armstrong Educational Foundation, has been named recipient of the JJA’s Lifetime Achievement in Jazz Journalism Award. See winners of all 39 categories of awards at JJAJazzAwards.org.

This year’s Awards for instrumentalists continue a multi-year trend by the JJA’s voting members to recognize accomplished women among the multiple nominated finalists, with women winning half the categories for the first time. Drummer and educator Terri Lyne Carrington (Musician of the Year), pianist-composer Kris Davis (Composer and Pianist of the Year), saxophonist Lakecia Benjamin (Up & Coming Musician of the Year), drummer-composer Allison Miller’s Boom Tic Boom (for Mid-Size Ensemble of the Year), baritone saxophonist Lauren Sevian and harpist Brandee Younger (Player of Instruments Rare in Jazz), and several other women were voted Best of the Year for their achievements in 2019.

Not that men are ignored in this year’s Jazz Awards. Miguel Zenón won Arranger of the Year and Alto Saxophonist of the year, Branford Marsalis’ quartet won Record of the Year for The Secret Between the Shadow and the Soul, Christian Scott aTundé Adjuah was named Trumpeter of the Year and Joel Ross was Mallet Player of the Year, both for the first time. Mark Stryker’s Jazz From Detroit (University of Michigan Press) was voted Best Book About Jazz, San Francisco Bay Area radio show host Richard Hadlock and New York-based photographer Richard Conde won, respectively, the Marian McPartland-Willis Conover Award for Lifetime Achievement in Broadcasting, and the Lona Foote-Bob Parent Award for Lifetime Achievement in Photography.

“The JJA is pleased to congratulate these winners, and indeed all the musicians nominated in our two-stage voting process,” said Howard Mandel, veteran journalist, author, NPR arts reporter and president of the JJA. “Especially with listeners largely confined to home, it’s important to let artists know they’re being heard, and to advise music fans about the best current jazz creativity, as jazz journalists do.”

The Jazz Awards were initiated in 1996, and follows on the JJA’s Jazz Heroes Awards for “activists, advocates altruists, aiders and abettors of jazz (which are being promoted via interactive broadcasts featuring Boston hero Ran Blake on May 23, and Los Angeles Hero Billy Mitchell on May 28 – see JJANews.org for details). Since mid-March, the JJA has also published international reports, JazzOnLockdown, about responses to the coronavirus.

Winners of JJA Jazz Awards have previously been presented with engraved statuettes before audiences at summer performances. This year’s winners will receive hand-printed scrolls certifying their Awards.

For more information on the JJA Jazz Awards, or the Jazz Journalists Association, visit HERE.