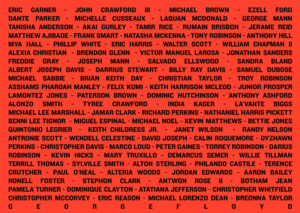 The killing of George Floyd, a 46-year-old black man in Minneapolis, served as the catalyst for nationwide protests which began last week. The sorrow and outrage over the disturbing video of his final moments came on top of a long history of black Americans being injured or killed in encounters with police or targeted with violence because of the color of their skin.

The #SayTheirNames campaign encourages publications and social media users to not just identify victims of police brutality by the incidents that killed them but to focus on their individual humanity and use their names. The hashtag is often accompanied by lists of names of black men and women killed in recent years, including Trayvon Martin, Tamir Rice, Michael Brown, Eric Garner, Philando Castile, Breonna Taylor and many others.