Few female singers matched the hard-swinging and equally hard-living Anita O’Day for sheer exuberance and talent in all areas of jazz vocals. Though three or four outshone her in pure quality of voice, her splendid improvising, wide dynamic tone, and innate sense of rhythm made her the most enjoyable singer of the age. O’Day’s first appearances in a big band shattered the traditional image of a demure female vocalist by swinging just as hard as the other musicians on the bandstand, best heard on her vocal trading with Roy Eldridge on the Gene Krupa recording “Let Me Off Uptown.” After making her solo debut in the mid-’40s, she incorporated bop modernism into her vocals and recorded over a dozen of the best vocal LPs of the era for Verve during the 1950s and ’60s. Though hampered during her peak period by heavy drinking and later, drug addiction, she made a comeback and continued singing into the new millennium. Read more, bio courtesy of John Bush. 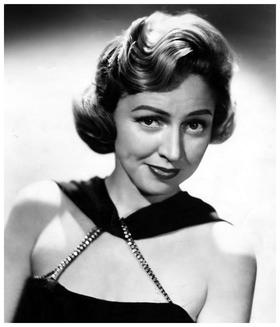