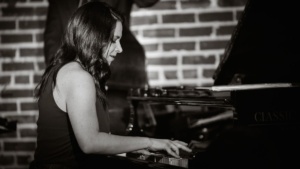 Following an extraordinarily difficult and volatile year in our country, the optimistic words of “Hope” and “Abundance” will be the inspiration for this unique series that will be performed at Nocturne Jazz & Supper Club on Friday nights in February by pianist and composer Annie Booth.

A special night out to reflect on the profound promise that lies ahead in 2021.

Annie Booth is an award-winning pianist, composer, and educator based in Denver, CO. She has established herself as an active force on the local and national scene both as the leader of her longstanding group, the Annie Booth Trio, and as a busy side-woman. As a composer, Annie has twice received the ASCAP Herb Alpert Young Jazz Composers Award (2011, 2017) and won the 2017 ASCAP Phoebe Jacobs Prize, given to one promising young female jazz composer each year. She was a Musician-In-Residence at the acclaimed Banff Centre in Canada, where she composed the music to her evenings-length chamber jazz piece, Flowers Of Evil, which premiered in 2018 at the Dairy Arts Center in Boulder, CO. Annie has released four albums, the most recent of which in summer 2018, in collaboration with vocalist Max Wellman (The Annie Booth Trio With Max Wellman). Westword Magazine named the Annie Booth Trio “Best in Denver” in the jazz genre in 2015, 2016, and 2017. When Annie is not performing with her trio or composing, she adores working with the Colorado Conservatory for the Jazz Arts (CCJA), an organization of which she is an alumna and current faculty member. In 2017, in conjunction with CCJA, she created the first ever jazz camp exclusively for young women, SheBop Workshop. She is fiercely passionate about empowering the next generation of young women to express themselves thorough the jazz art form.

The Bar at Plaza 38—June Line-up

City Park Jazz: Back in the Park Again!