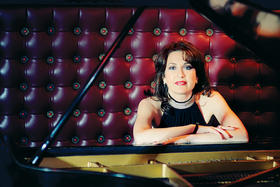 At the start of this year, pianist Evans replaced Ethan Iverson in the highly influencial trio, the Bad Plus. That new version of the band (that’s on the cover of the April issue of DownBeat) truly exploded on the scene in 2000 is touring in support of the trio’s CD Never Stop II (the first Never Stop was released by the original trio in 2010). And on Tuesday and Wednesday, the Bad Plus II is on stage at Dazzle at Baur’s, 1512 Curtis, at 6 and 8:30 p.m. (303-839-5100).

Around the time that Iverson, drummer Dave King and bassist Reid Anderson began playing together in Minneapolis, was leading the Captain Black Big Band (named for the tobacco, not James Blood Ulmer’s album Tales of Captain Black). He adds a dash of Philly to the Bad Plus mix.

Along with opening its sound to covers of rock tunes, the Plus has always had an original streak, offering its versions of things from Stravinsky’s Rite of Spring and Ornette Coleman’s Science Fiction to touring with tenor saxophonist Joshua Redman. The group has a big and powerful sound and hearing it in a club environment is quite a treat.

Another visitor to town this week is singer Alexis Cole, who is at Dazzle on Sunday at 5:30 and 8 p.m. Among other things, the singer has recorded on the Motema label, including the CD I Carry Your Heart: Alexis Cole Sings Pepper Adams. The music of the great baritone saxophonist out of Detroit has been collected in a five-CD set, Joy Road, and Cole’s disc  (volume five) offers the first-ever versions of Pepper’s compositions with lyrics added brought to life by Cole’s voice. That’s certainly something worth hearing.

Over at Nocturne, 1330 27th St., on Friday, drummer/singer Dave Tull does the late night show at 11 p.m. with Jeff Jenkins and Ken Walker. Tull’s new CD is Texting and Driving that is filled with humor.  There is jazz at Nocturne every night except for Sundays and Mondays and on Tuesday at 7 p.m. it’s saxophonist Anisha Rush with a quartet that has the fine young pianist Solomon Chapman in tow.

Dazzle also has bassist Matt Skellenger’s group on Friday at 9 p.m., pianist Purnell Steen’s band served with up with pancakes on Saturday at 10 a.m. and Ginga doing Brazil on Saturday at 6:30 p.m.