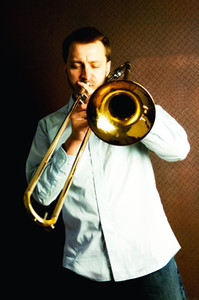 Though rooted in jazz, Denver-based trombonist, composer, arranger, and educator Adam Bartczak reaches into many walks of music.  He has played and recorded with musicians from Robin Eubanks, Bryan Lynch, and Geoffrey Keezer to Del the Funky Homosapien, Ziggy Marley, and a hip-hop/jazz collective named Yo, Flaco!

An active performer, he heads up a 19-piece big band, Adam Bartczak Republic, featuring some of Colorado’s finest with whom he released an album, “Grass is Greener,” on Dazzle Recordings.  Original compositions and arrangements cover a diversity of styles, including swing, Afro-Cuban, and hip-hop.  The album was released in May 2013.

Another group he’s associated with is The Democracy, which plays regularly at Nocturne Jazz & Supper Club, they released their CD named The Democracy in 2016.  The Democracy is noted for allowing each performer to be an active a part of the creative direction of the ensemble. All five players contribute to the original works performed and all have a say of how each night will go. The musicians in this group, in addition to Bartczakon trombone are Sam Williams on saxophone, Peter Stoltzman on piano, Gonzalo Teppa on bass and Dru Heller on drums.

Other projects of his include presentations of works at the Jazz Education Network Conference and for the West Point Jazz Knights Composers Forum.

Adam has taught students of many ages.  In addition to trombone, he teaches trumpet, tuba, French horn, baritone, euphonium, and alto horn.  He emphasizes the importance of being grounded in traditional techniques and styles as well as being open to new ideas.