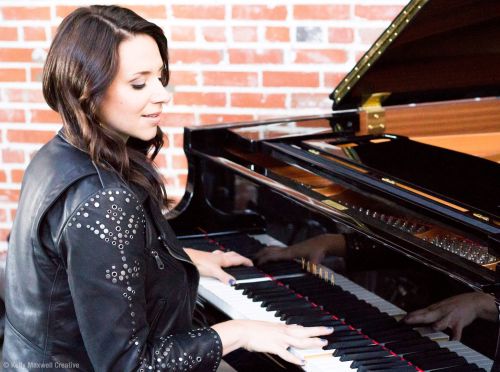 Annie Booth is a Denver-based jazz pianist, composer, arranger, and educator. Growing up in a musical family in Westminster, CO, she began the piano at a young age and started playing jazz in high school through the renowned non-profit organization, the Colorado Conservatory for the Jazz Arts. She went on to study music at the collegiate level, earning a BM in Jazz Studies from the Thompson Jazz Studies Program at the University of Colorado-Boulder in 2011.

Annie Booth has established herself as an active force on the on the scene both as a bandleader of the Annie Booth Trio and as a busy side-woman. She performs in legendary trumpeter Greg Gisbert’s Quartet, mostly notably on a recent tour of Mexico through the “New York Jazz All-Stars” concert series. Annie is a recipient of an ASCAP Young Jazz Composers Award (2011 and 2017) and was recently awarded the 2017 ASCAP Phoebe Jacobs Prize, an award that recognizes one promising young female jazz composer. She has been named “Best In Denver” from Westword Magazine the jazz genre in 2015, 2016, and 2017 and was featured as part of Jazz 89.3 KUVO’s 2015 “30-Under-30” series.

In addition to performing, Annie is active in jazz education in Colorado – she is the Program Assistant and a faculty member for the Colorado Conservatory For the Jazz Arts.