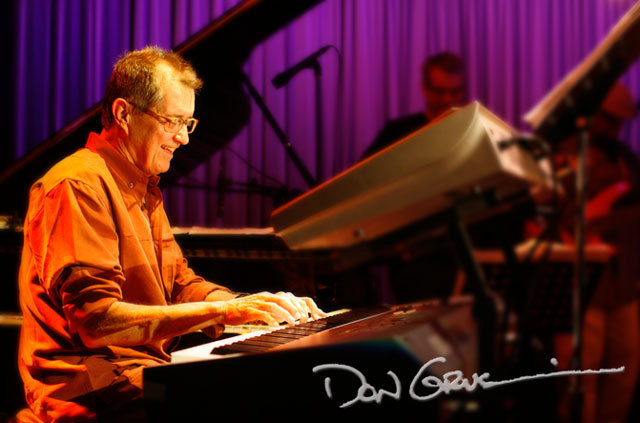 Artist, innovator, educator, performer and advocate for social change, Don Grusin Music and Bad Dog Music are the production houses and publishing entities for this esteemed American composer, producer, arranger and pianist with 3 Grammy’s, 20 CD’s and an unstoppable global vision that infuses everything he does from recording to teaching.

Born in Colorado and influenced mightily by his immigrant father from Latvia, Don grew up as a wannabe cowboy, played sports in school, and always had music as something to fall back on – if you grew up in the Grusin household, you had to play (read: practice) piano. Don started when he was 6, and his musical influences came from square-dancing to country bands at the local grange; from pianists Art Tatum, Oscar Peterson, Bill Evans and Vladimir Horowitz; to his dad’s strolling through the house playing 2nd violin parts of Bartok string quartets.

Also of influence was their small town R&B radio station where Don digested the music of the great soul and funk bands and singers and immersed the ‘Groove’ into his playing trademark. This early experience was also how his interest in African and Latin American music was born. Adding to this was his older brother Dave’s influence, who pointed him, unwittingly really, to the great jazz players of the 1950’s-60’s.

To complement his interest in world music, Don obtained a Bachelor’s degree in Sociology and a Masters Degree in Economics from the University of Colorado. He taught as a Fulbright Professor of Economics at the Autonomous University in Guadalajara, Mexico, before returning to the U.S. to enter the music business full-time after joining Quincy Jones’ band for a Japan-U.S. tour in the mid 1970s.

Don was the creative spark-plug for the acclaimed Atlantic Records fusion ensemble Friendship, and from there proceeded to record and produce scores of albums over the course of the next 35 years – including 20 of his own – as well as composing for and producing Ernie Watts’ Grammy-winning Quest CD, Musican.

He’s had five recording homes over the years – GRP out of NYC, VideoArtsMusic in Tokyo, JVC and Universal for Japan and Asia, and CareMusicGroup in Germany.

Don Grusin truly epitomizes the term visionary. Artist, innovator, educator, performer and advocate for social change, Don Grusin Music and Bad Dog Music are the production houses and publishing entities for this esteemed American composer, producer, arranger and pianist with 3 Grammy’s, 20 CD’s and an unstoppable global vision that infuses everything he does from recording to teaching.

As a result of his 35 years of travels playing and recording around the globe, Don was struck by finding many fellow musicians doing positive social change work in their communities and countries and has parlayed his thoughts and experiences into a multidisciplinary course at the ATLAS Institute, also at the University of Colorado, called World Music Video Projects as Catalyst for Social Change. Don created the class to bring together such diverse fields as economics, music, film, ethnography, journalism, and art to produce videos as educational and marketing tools leading to greater global social awareness and action.

Students enrolled in the course document and assist individuals around the world – musicians, artists, social activists – with similar goals of working to create social and economic progress, raise personal and public awareness and conduct investigative teamwork with a purpose. The course is interdisciplinary in that it includes majors from throughout the university and utilizes music as the medium to bring and bond the students together in their approach when choosing subjects, trading ideas and entrepreneurially collaborating – a defining element of the class.

This class can be viewed as the prototype for similar classes worldwide, and Don’s vision is to continue the virtual networking that his students have created. Examples of social forces developed in the class leading to transformation in action include the films “Fairloom,” “Street Musicians,” “Sex Trafficking in Denver” and “Tjupurru.” (Adrian Fabila, known around the world as Tjupurru, is a didgeribone virtuoso with whom Don has collaborated both in concerts and recordings, and is also a “musical activist” for social change. The latest collaborative didjetronica recordings are a combination of international players joining original grooves originated in Aboriginal Australia, and are remixed by the great Lee Groves of ARIA Fame – the award for Grammy-quality work in Australia. The album, entitled Global Grove, will be released later this year and includes players from every continent.)

Clips from these student-produced videos, created in the Fall Semesters of 2008 and 2009 at the Atlas Institute, can be viewed from Don’s website http://dongrusin.com/videos.php. Additional information on the course itself along with a prototype for similar classes worldwide can be been in the IMPACT presentation http://dongrusin.com/files/public/impact.pdf on Don’s website.

The recipient of Colorado University’s Alumni Association’s 2006 George
Norlin Award for distinguished lifetime achievement, Don also serves on the advisory board of the department of economics at CU.