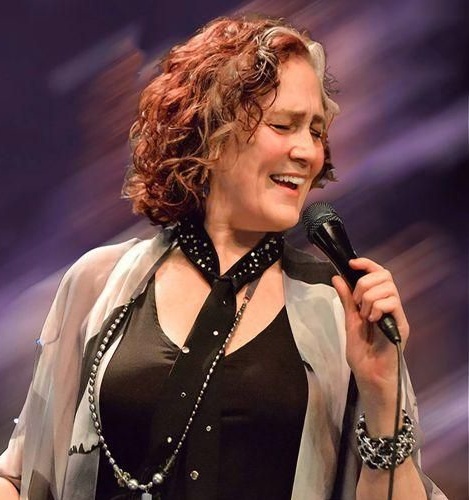 MaryLynn was a founding member of the Grammy-nominated vocal jazz group, Rare Silk. The group got their start in Boulder, CO. Their very first album, New Weave flew to the top of the Billboard Jazz charts and received 2 Grammy nominations. MaryLynn and the group toured the world singing in the US, Europe, and Japan.
Rare Silk received acclaim working alongside artists such as Miles Davis, Branford Marsalis, Dizzy Gillespie, Benny Goodman, and as an opening act for Spyro Gyra and BB King. Their touring took them to some of the best venues in the country – The Playboy Jazz Festival at the Hollywood Bowl, Carnegie Hall, Jacksonville Jazz Festival, Blues Alley in DC, New York Jazz clubs, and Boston Globe Jazz Festival, to name a few. Her experience working within this environment
gives MaryLynn a rich history in the Jazz idiom.

Secret Language is designed with the idea of ‘active listening’, much like when you put an album on the turntable and listen from beginning to end. It is sprinkled with ‘miniatures’ in between full-length tunes, much like sorbet between courses at an engaging dinner!

From MaryLynn: I am beyond thrilled to have recently released my long-held dream of recording a professionally produced album with my dear friend and Producer, Kip Kuepper at Coupe Studios in Boulder. This is a collaboration fueled by many years of living within and loving the music that sings from my heart. This is not a ‘standards’ album ≈ it is an expression that stems from listening and performing… experimenting within the many modes of the music we call Jazz. I call this album ‘heavily Jazz-influenced’, as the range and scope of the music will take you on a journey perhaps unexpected. It’s also kinda ‘vibey’, which I dig! Five of the tunes feature lyrics I’ve written to existing tunes by Herbie Hancock, Mike Stern, Pat Matheny, Michael Schuller, and Kip Kuepper. Kip’s influence has been profound, and our collaboration has only deepened our friendship, both in music and in life. All in all, this one’s been called my ‘Swan Song’ (although, word is there’s more music
coming…), and I hope you’ll decide to join me on my journey. Let’s take a little trip (it’s on the album!)…