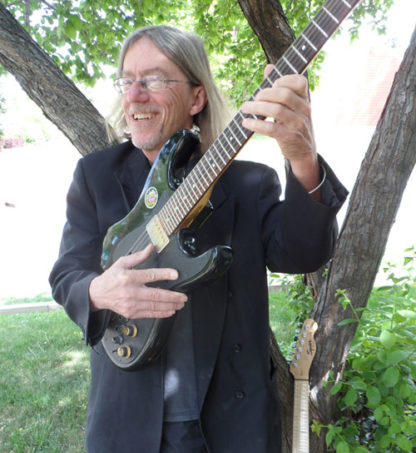 Neil Haverstick was born on September 22, 1951, in St. Louis, Missouri, and started playing guitar in 1965, being highly moved by the music of the Beatles, Yardbirds, Cream, and the general musical atmosphere of the 1960’s. Haverstick is a guitarist, composer, author, and instructor… here’s a few essentials for you press folks…

As a guitarist, the Denver Post called him “one of the most sought after session players in town.” Haverstick has performed zillions of gigs, such as playing and recording with the Colorado Symphony, including appearances with Judy Collins, Bernadette Peters, Diahann Carroll, Tommy Tune, Ferrante and Teicher, and Bill Conti. He has also played in orchestras backing such artists as Bob Hope, Dinah Shore, Hal Linden, Charley Pride, Glen Campbell and others. With his own bands, he has opened shows for B.B.King, Steve Miller, and King Sunny Ade; he has also backed up blues greats Jim Schwall and Joe Houston. As a freelance guitarist he has played blues, jazz, classical, country, flamenco, and folk, as well as plays (Man of La Mancha, Grease, Always Patsy Cline, The Last Five Years, and A Dream Play, performed at the Cleveland Playhouse, with noted director Pavel Dobrusky) and many private functions. He has also appeared on numerous CD projects by Denver artists.

As a composer, Haverstick won Guitar Player magazine’s 1992 Ultimate Guitar Competition (Experimental Division) with a 19 tone piece, “Spider Chimes.” He also won the 1996 arts Innovation Award in Denver for another 19 tone song, “Jimmy and Joe,” and the 1999 Composition Fellowship from the Colorado Council on the Arts. He has 10 CD’s of original music available featuring music in the 19, 34 and 36 tone systems, as well as fretless guitar and Oud. His Microstock festival is in its 11th year, and he has performed at concerts in New York, Los Angeles, El Paso, Albuquerque, Muncie, Bellingham, Boston, Prague, Freiburg, Germany and Den Haag, the Netherlands. His composition “Mysteries” was published in 2007 by Christine Paquelet Edition Arts (www.paqueleteditions.com). Guitar Player mag said of his compositions, “Bold and daring, Haverstick ventures into distant aural galaxies”.

As an author, Haverstick has written for Guitar Player, Downbeat, Vintage Guitar and Cadence magazines, and has written three music theory books. “The Form of No Forms” was praised by the late studio guitarist Tommy Tedesco, who called it “A great book. I am still learning with Neil.” Jazz giant Joe Pass said, “I feel this book offers a new insight into not only playing the guitar, but music and how to understand it. A real book.” Neil’s most recent book, “Harmonics & Spirals, The Code of Music,” is an introduction to the mysteries of the Harmonic Series, the source of all musical intervals.

As an instructor, Haverstick has taught hundreds of students, both privately and at Swallow Hill Music in Denver. He has been a guest speaker at Metro State College, The University of Colorado and The University of Denver. In October 2005, he taught a seminar on microtonal tunings at Berklee College of Music.

If the Earth Was a Woman

Way Down by the Mississippi