Cast Your Vote for “Northside” 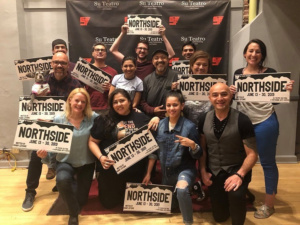 Our friends at Su Teatro Cultural & Performing Arts Center thank you for your support and vote in getting the “Northside” production on the map! This play rapidly gained popularity, adding performances so that as many people as possible would get a chance to see it.

KUVO hosts Yolanda Ortega of “Canción Mexicana” and Molly Gallegos of “Super Sonido with La Molly” are in the running for best actress. As you scroll through you’ll see that Su Teatro’s “Ask a Mexican” also has several nominations.

Voting is NOW OPEN for the 2019 BroadwayWorld Denver Awards—cast your vote for “Northside”—HERE! The nominees are set, and now you can vote to make sure your favorite local theatres and performers are recognized! Voting will run through December 31. Winners will be announced in January!