Celia Cruz was born in Havana, Cuba on October 21, 1925. She first gained recognition in the 1950s, as a singer with the orchestra Sonora Matancera. Relocating to the United States after the ascent of Fidel Castro, Cruz recorded 23 gold records with Tito Puente, the Fania All-Stars and other collaborators. Cruz died in New Jersey in 2003, at the age of 77.

Celia Cruz grew up in the poor Havana neighborhood of Santos Suárez, where Cuba’s diverse musical climate became a growing influence. In the 1940s, Cruz won a “La hora del té” (“Tea Time”) singing contest, propelling her into a music career. While Cruz’s mother encouraged her to enter other contests around Cuba, her more traditional father had other plans for her, encouraging her to become a teacher—a common occupation for Cuban women at that time. Article from Bio. – read more. 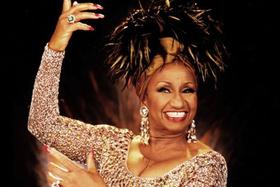