Round two of Chipotle’s “Cultivating Thought” series has been announced, with a diverse collection of 10 writers, whose work, thoughts, musings and ideas will appear on cups and wrappers.  This time, curator and NY Times bestselling author Jonathan Safran Foer (Extremely Loud and Incredibly Close, Eating Animals) included three Latino authors in the mix, but none of them Chicano or Mexican.  We called on Denver-based mystery writer Manuel Ramos for comment. 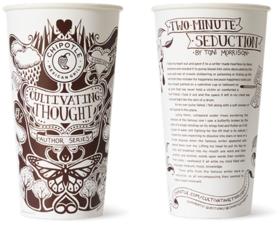 “It’s a very impressive list,” said Ramos.  ”The irony is obvious, but it would that if you’re a Mexican grill, that you might have a few Mexican authors listed on your cups.”

Speaking constructively, Ramos offered some suggests for the next round:

Laura Esquivel (Like Water for Chocolate – each story has food recipes, “the obvious choice”).

The Mexican and Mexican literary community organized a Facebook page when the initial round of “Cultivating Thought” writers were picked, with no Latino presence at all.  It’s called “Cultivating Invisibility: Chipotle’s Missing Mexicans.”

In another segment, we unearthed a 1965 study from Yale published in the Journal of Personality and Social Psychology titled “FACILITATING EFFECTS OF “EATING-WHILE-READING” ON RESPONSIVENESS TO PERSUASIVE COMMUNICATIONS.”  In short, Professors Janis, Kaye and Kirschner found that “‘eating-while-reading’ has a facilitating effect on the amount of opinion change.”

Thus the “Eats-and-Beats” team concluded that burrito wrappers, fortune cookies and teaboxes with deep, profound writings were all persuasive!