I don’t know about you, but I love to watch pigeonholes explode. Not with pigeons in them of course, that would be too messy. No, the fun stuff is when those small boxes that the human mind loves to construct turn out to be way too small and the things you stuffed in there suddenly blow up leaving splinters, shards and expectations scattered all over the floor. And, assuming no pigeons are harmed in the explosion, clean up’s a snap!

In the couple of years I’ve been aware of singer Veronica Swift, she’s occupied the pigeonhole in my mind labeled “Excellent new jazz singer who performs standards.” Having not seen her in concert, that classification came about from hearing her 2019 album Confessions (Mack Avenue, 2019) and this year’s This Bitter Earth (Mack Avenue, 2021). The material on those albums generally falls into the Great American Songbook category, more or less.

Friday night at the Newman Center’s elegant Gates Auditorium, she and her band seemingly nestled comfortably in their predetermined slot for the first 45 minutes or so of their 90 minute concert. It happened slowly at first. In hindsight, maybe the first whiff of a burning fuse came from keyboard man Mathis Picard. While he stayed mainly on the grand piano and only occasionally dabbled with the electronic keyboards to his left, he nonetheless approached his instrument slightly outside the traditional vocal accompanist role. He often matched the playfulness Swift frequently exuded. He also launched several wild excursions that required use of all 88 keys. But these were always in the context a jazz standard or something like it.

Swift took the stage in a snug, floor length black gown that adhered nicely to the superstructure beneath. It had silver sequined stripes down the sides and sleeves; perfect for revisiting classic songs from the mid-20th Century. The material for the first half of the concert was drawn primarily from her most recent album, starting with the title track. She comes from a musical family and she’s been recording albums since she was nine years old. Now 27, she not only possesses one of the strongest, clearest voices in jazz today, but she deploys it with style, wit, and expert phrasing and nuance.

A comparison to Cecile McLorin Salvant seems pretty obvious, especially since, up until Friday anyway, both singers shared adjacent pigeonholes in my over-compartmentalized mind. Both are similar in age (32 in the case of Salvant), possess a vocal talent that’s in the top one-tenth of one percent of singers anywhere and both show an affinity for mid-century jazz classics. Not only that, they both seem to enjoy dredging up semi-forgotten ditties that now seem horrifyingly sexist. But, in true Millennial form, they ladle on the irony. Salvant recorded Hal David/Burt Bacharach’s “Wives and Lovers” which warns young wives to “run to his arms the moment he comes home to you” because “there are girls at the office/and men will always be men.” Swift’s entry in the irony sweepstakes Friday night was “How Lovely to be a Woman” with its “celebration” of womanhood, “How lovely to be a woman, and have one job to do/To pick out a boy and train him, and then when you are through/You’ve made him the man you want him to be/How lovely to be a woman like me.” That song appears on Swift’s latest album and is part of a broader commentary on current societal ills. “How Lovely” is a crack at sexism while “You’ve Got to be Taught” (from South Pacific, strangely), which also appeared Friday night as a straight-up protest song, addresses multi-generational racism. “He Hit Me (And it Felt Like a Kiss)” protests domestic abuse and the late Dave Frishberg’s “Sports Page” complains about fake news.

The big difference between the two was Swift’s exploding pigeonhole.

Had the audience been paying attention, we may have guessed what was coming because she dropped a strong hint part way through the first half of the concert. She confessed to having been in a metal band when she was in college. In the midst of all the (mostly) straight ahead jazz, it was easy to chalk that up to a youthful dalliance. As it turned out, it wasn’t. 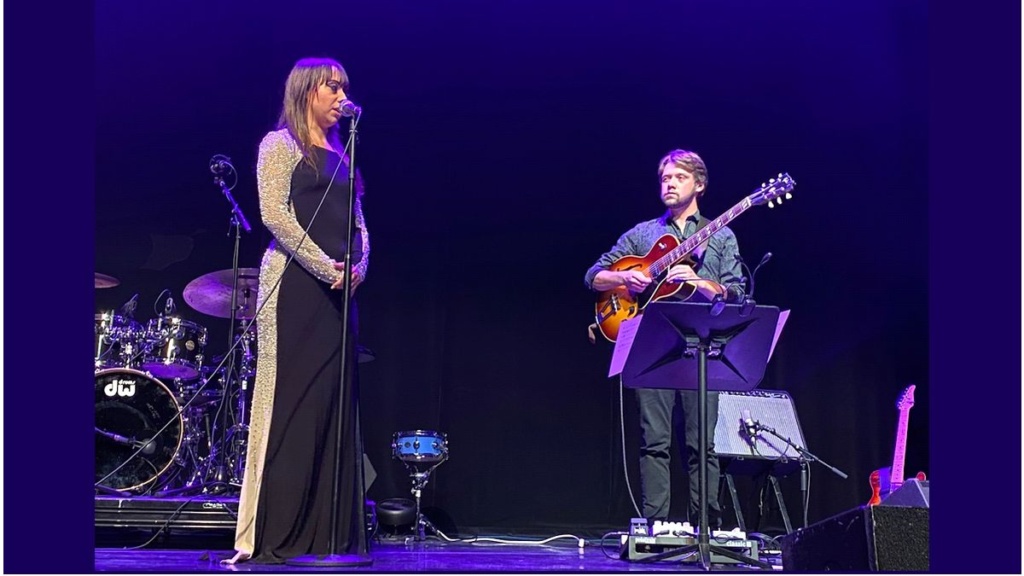 The first sign of serious pressure on one side of the pigeonhole came when guitarist Alex Heffron appeared on stage right around the half way point in the concert. Heffron is a Denver based musician, who, Swift explained, she first met at the Telluride Jazz Festival where they became friends. Since he was in town and so was she, she invited him to sit in for the second half of the show. His first tune was a duet with Swift. She explained her love of music beyond jazz, in this case, opera. For years she has enjoyed taking pieces of operas and reworking them into something a little closer to a jazz song. Friday night, she selected a Puccini piece she had rearranged which was called “Severed Heads.” Although not typical subject matter for jazz, death, blood and severed body parts seem much more common in the world of opera. The music of the piece belied its headless title and was very sweet and gentle, lyrics aside.

The next tune pushed even harder on the opposite side of the pigeonhole. Heffron, who had helped with the “Severed Heads” on a hollow body electric, put that axe aside and picked up a solid body electric guitar as Swift announced the next number, Ellington’s “Do Nothing Til You Hear from Me.” Usually performed in reverent jazz standard style, it’s typically approached as a gentle breakup song. Swift, on the other hand, turned it into a raw, electric blues-rock number that left no doubt that the subject of the song was not just getting dumped, but kicked in the butt a couple times for good measure. Swift delivered the punch line emphatically with several exclamation points, “And you never will!!!”

The band returned to the middle of its assigned pigeonhole with the next tune, a version of the tender standard “The Nearness of You.” Most of the tune was delivered in standard jazz standard style, but the tempo picked up toward the end, some guitar power chords started to come through and the fuse got closer to the dynamite.

The energetic coda to “The Nearness of You” provided the segue to the subsequent drum solo. Swift said drummer Dylan Elise was playing his first gig with the band and was recently with Blood, Sweat and Tears. Dylan has hands that are so fast, they often looked like a blur. That might have been a trick to cover up for the fact that he actually has four arms. If you go to veronicaswift.com and click on the “Videos and Photos” tab, you’ll find a couple of videos of Swift performing with Blood, Sweat and Tears and one of those videos includes a drum solo by Elise which bears a pretty close resemblance to his Friday night solo.

Drum solos, by their nature, are usually pretty bombastic, so the energy level was already rising, but then, the pigeonhole was blown to smithereens when Swift bounded back on stage dressed as a biker chick in full leather, wide belt and bell bottom leather pants. The drum solo never really stopped. The other musicians joined in including Philip Norris who had swapped out his acoustic bass for one of the electric variety. As Swift pranced around the stage and flipped her long black hair back and forth, it was apparent we weren’t in jazz standard land any longer. Except, in the middle of the first all-leather rock song, Swift let loose with a bebop scat barrage. And it worked. And it was fun! 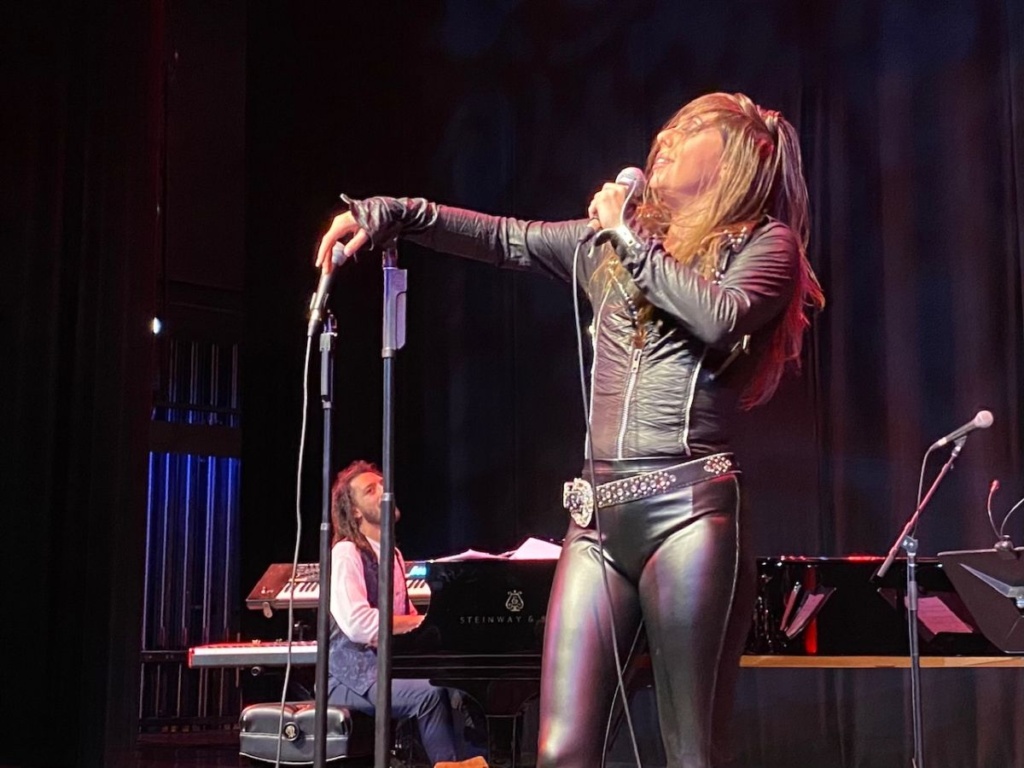 Next up was “Hey Big Spender,” a mid-century song, but heavily metalized so that it paired nicely with new biker chick motif. “Hey Big Spender” is from the 1966 musical “Sweet Charity” and was first performed by Peggy Lee. It was also a hit in 1967 for Shirley Bassey. In the play, the song is performed by hostess/dancing girls taunting customers at a cabaret to the striptease-style tune. Although it has a mid-century pedigree and some jazz cred, it was also covered by Queen in the 70s and 80s and that’s the version that provided the prime inspiration for Friday night’s cover.

Motown was the next stop with the Temptations’ “Papa Was a Rolling Stone.” But instead of a soulful version like the original, Swift rocked this one too. During the song, she encouraged the audience to clap in time, exhorting, “It’s a rock concert now!” The closer of the main set was “Sing” by the Dresden Dolls, a band that was active mainly in the early 2000s and was classified as “dark cabaret.” The song was quieter than the previous three and featured a nice melody. Swift encouraged the audience to sing along on the chorus which was pretty simple, “Just sing!” Finally, for the encore, Swift and band performed “Keep Yourself Alive,” a song written and performed by Queen, which was their first single from 1973. Now, nearly 50 years later, in these COVID times, that seems like good advice.

As I left the concert hall, pieces of the pigeonhole formerly inhabited by Veronica Swift crunched beneath my feet. And it felt good.