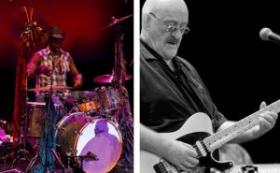 Billed as “Dave Mason’s Traffic Jam,” Mason’s current tour is keeping the music of Traffic alive and well. Mason only stuck around for the first two Traffic albums, but he wrote some key songs and, besides, there’s only one other member of Traffic left; Steve Winwood. And certainly Winwood had a much bigger influence on Traffic than Mason did. But Traffic was one of the greatest rock bands of the late ‘60s and early ‘70s, so maintaining that legacy is unquestionably a worthy venture.

The first set of Tuesday night’s show was exclusively Traffic material. Mason also peppered the show with stories of the early days of Traffic including the band’s time at a big, old house in the country without electricity or plumbing. He didn’t explain, however, why he left the band. During a break between songs, someone in the audience shouted a suggestion that he get together with Winwood. Mason replied, “That’s up to him.” Sounds like there’s some juicy gossip here. Too bad this is a music report.

Of the nine Traffic songs in the first set, only one, “You Can All Join In,” was written by Mason. Quite often, after rock bands break up, the individual members only play the songs they wrote. Maybe it has something to do with rock’s general aversion to covering other people’s songs (jam bands excepted). By contrast, covering other people’s songs is the bread and butter of jazz. In fact there is a vast body of work known in the jazz world as “standards.” Frankly, it can be great fun to hear a familiar song turned around, turned inside out and turned into something new.

So playing other people’s songs is just fine with me. In fact, one of the highlights of the evening was “Low Spark of High-Heeled Boys.” That was one of Traffic’s most famous tunes and it was written by Winwood and Traffic’s drummer Jim Capaldi and was recorded after Mason left the band. Mason’s version was very different. He dropped the classic, laconic riff and turned the song into a much bluesier tune; a noddin’-yer-head-blues. At the end of some phrases he casually transformed from singing into talking; perhaps a little like Jimmy Dean, but really more like Freddy Cole on “Rio de Janeiro Blues.”

Another highlight was “Dear Mr. Fantasy,” title track from the first Traffic album. That one was written by Winwood and Capaldi along with the fourth member of Traffic, sax and flute man Chris Wood. Mason’s version Tuesday night retained the classic guitar lick to great effect and was pretty close to the original.

Mason left Traffic two or three times, but by 1971 or so he was gone for good to concentrate on a solo career that turned out to be fairly successful. Tuesday night, he drew heavily from his first solo album, 1970’s Alone Together: “World in Changes,” “Just a Song” and “Shouldn’t Have Took More Than You Gave.” He said a couple of those would be referred to by Sirius XM as “deep tracks.” He discussed radio again when he introduced a couple new tunes. He complained that radio used to be so good, but now it’s not. “Classic rock radio just plays everything you’ve already got,” he said. True dat. He complained that they won’t play new music just because it’s new. “They should know there are only two types of music: good and bad. Age doesn’t have anything to do with it.” This is the perfect place to digress into some musings about jazz radio in comparison to rock radio. Certain jazz stations are completely capable of keeping the old favorites alive while presenting the best of new artists and new music hitting the scene. There are a few rock radio stations also capable of that but, like jazz radio, they’re pretty scarce.

One of his new songs, “How Do I Get to Heaven” was also an opportunity for Mason to talk about his life-long friend Jim Capaldi. The two grew up only a few miles away from each other. A few years ago they got back together to do some recording. However, before they could finish, Capaldi succumbed to stomach cancer. Before his death, he had started work on the song which Mason ultimately finished. Another new song was “Good to You.”

“Feeling Alright” closed the second set. This one was written by Mason and appeared on the second Traffic album. Mason explained that many people think Joe Cocker wrote it because he had the biggest hit with it. The tune has been covered many times and no doubt has spawned significant royalties for Mason. The encore tune was “All Along the Watchtower,” a Bob Dylan tune famously covered by Jimi Hendrix (and an exception to the generally-no-covers rule). Mason actually played on the Hendrix version and covered it himself on his 1974 self-titled album. (Jeez, another exception!)

Mason brought along a three piece backup band, Tony Patler on keyboards and vocals, Alvino Bennett on drums and John McEuen on guitar and vocals. McEuen was a late edition to the tour, substituting for Jason Roller who played in the band up until a few weeks ago. McEuen seemed at home, contributing numerous guitar solos and some harmony vocals. He and Mason also played a few twin harmony leads for a classic 70s rock sound.

Patler handled lead vocals on several tunes that Winwood originally sang on such as “Medicated Goo” and “Who Knows What Tomorrow May Bring.” While he handled them ably, it’s difficult to match up to Winwood who has one of the more distinctive voices in rock. He, McEuen and Mason frequently meshed for some sweet three part harmony. Patler had a number of keyboard solos and held down the bass parts throughout the evening. While the keyboard can fill in the low end, it wasn’t a substitute for a solid, punchy bass player. Bennett added a few background vocals, but mainly stuck to drumming. His drum kit featured two cymbals set right out front and above his head; making his drums look like a chopper. They weren’t just for show, he hit them regularly.

As for Mason, time has been good to both his voice and his guitar playing ability. The same can’t be said for his hair, but that’s true for a lot of us. He played an acoustic twelve-string on nearly half the songs. But he also picked up a Stratocaster and laid down a number of classic rock guitar solos; generally melodic with an ample dose of triplets. His voice was clear and strong and still had an impressive range. And strangely, for a lad raised in England, he sounded exactly like an American from the Midwest.

You Can All Join In

Heaven is in Your Mind

Who Knows What Tomorrow May Bring

How Do I Get to Heaven

Let it Go, Let it Flow

Shouldn’t Have Took More Than You Gave

All Along the Watchtower