There is a difference between the stable family restaurant and the “next big thing” trendy spot that has the latest food fad on fancy, overpriced display.  With some thoughts on the former, Alfonso Nuñez from La Cueva (“The Cave”) in Aurora visited “First Take with Lando and Chavis.” 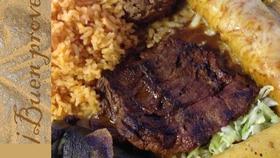 “We get folks that come in and say, ‘hey, I haven’t been here for 20 years and the food is exactly the same,'” said Nuñez, who was a child when his parents opened the spot on Christmas Eve 1974.  Some of their recipes come from the family heritage in the Spanish-influenced Guanajuato region of Mexico.

Over the years, the Nuñez family has been central to the revival of that stretch of Colfax through Aurora.  ”We’re now an arts district, and we have a brewery in the neighborhood.  We’re also starting a business association to help the little businesses in the area.”  Nuñez mother Norma also established a foundation to support youth scholarships and career development.

La Cueva has demonstrated how to bring together family, community and food.